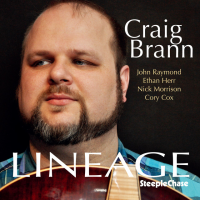 The cream always rises to the top. That might sound like a trite statement (and one definitely not applicable to pop music), but is one that consistently holds true in jazz. So it follows that guitarist Craig Brann, in a discipline in which one cannot fake it to make it, would then be the crème de la crème. Lineage, his fourth release as a leader, follows A Conversation Between Brothers (SteepleChase, 2016) and firmly established his place at the table of NYC jazz cats.

While the draw of his previous discs might have been the high profile playing partners, Mark Turner, Greg Tardy, Rudy Royston and Matt Wilson, Lineage leans heavily on the like-mindedness of his quintet. Bassist Nick Morrison has kept time on all four earlier releases, and trumpeter John Raymond often plays the yin to Brann's yang here. The inclusion of another chordal instrument, Ethan Herr's piano, shows Brann's mature confidence in his music. Drummer Cory Cox injects a thoroughly modern sound to the whole affair.

Opening with "Dilla Days," a reconfiguration of Mark Turner's "Dharma Days," Brann integrates R&B with some spirituous bebop without uttering the word "fusion." The panache shown here, and throughout this disc, carries the day. Brann has the ability to share the stage (through his writing and arrangements) creating a true quintet recording. Pieces like "Basso Continuo," built around Morrison's bass line, and the infectious swinger "Verdict," (a nod to Thelonious Monk's "Evidence") fully welcome the voices of Herr, Cox and Raymond. The same is true for "Reinventing Something Round," a cascading sound that inexhaustibly blossoms with ineffable beauty.

As a guitarist, Brann continually reshapes his sound. "Dozen The Swan's Hound (Lie Kiss Coat Hewn)" flashes a John Scofield-like edge of electric aggression, while "Fur Beccah (Prelude)" pulls from an acoustic classical tradition. When a musician has the capacity to do just about anything, the choices he makes are critical. Here, Brann and his quintet never put a foot wrong.