BY NENAD GEORGIEVSKI
November 20, 2021
Sign in to view read count

Morgan diligently sifts through a myriad of sources such as various interviews, books, and documentaries, and digs deep into the narrative thus providing a fresh insight into this great record and what it stands for. 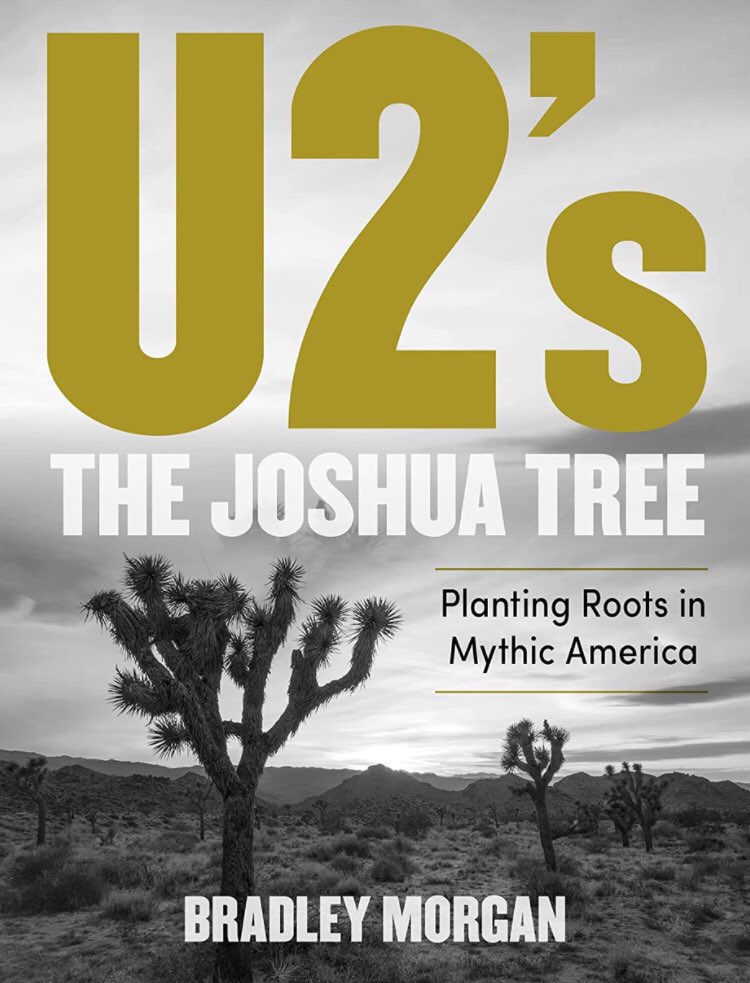 Popular music, like books or visual arts, is often one of the best ways we have through which we can view our own cultural orientation and the times we live in. The artistic and experimental shifts in music have often reflected the changes that have occurred in our societies. In this regard, we can view popular music and records as artifacts through which we can better understand the times and places in which they were created rather than being viewed as mere entertainment. Some records simply entertain us and some records simply testify about the times we live in, shift the current tides, open new vistas, and have the power to enhance our understanding of music and culture in general. One such record was U2's The Joshua Tree (Island Records) which reigned supreme back in 1987. Author Bradley Morgan's book U2's The Joshua Tree: Planting Roots in Mythic America dives in deep and takes a closer look at U2's iconic album through the prisms of the many themes that the songs deal with, thus illuminating its depths and its meaning in context of today's divisive world.

These days, it's difficult to perceive the importance of a single album and the impact it can have on culture. The unlimited availability and easy access to music, people's short attention spans, and the ways we perceive and consume music, have eroded the mysteriousness that a single record can have and the ways it can send ripples through space-time. And yet, albums rather than just singles tell the whole story—they represent definitive, long-standing artistic statements and they tell us where the artists were at that specific moment in time. An album is considered the epitome of any artist's art as the songs are a statement of their voice and state of mind as well as a reflection of their surroundings. An album has always been considered the highest form of recorded experience an artist could offer.

Morgan is a media arts professional based in Chicago and this is his debut book. It is a fine companion for this journey through the stories these songs tell and the meaning this album had and still has. The author's prose keeps the reader engaged, as he offers fluid, accessible descriptions of the stories behind the music. Released in 1987, The Joshua Tree was U2's fifth album and it topped the charts in 20 countries. The album marked the point where U2 made the jump from respected and moderately successful rock band into being rock icons, while it also confirmed their staying power. Over 30 years later, it is still one of the bestselling albums in the history of popular music with more than 30 million copies sold and is rightfully considered to be among the best rock albums of all time.

At the time, the band was enamored with America and its cultural legacy, and they found inspiration in America's politics, music, social issues, and literature. As a result, the songs deal with this country's landscape, ideals of freedom, violence and duality. At one point, the working title was "The Two Americas," referring to "Mythic America and the Real America." This dichotomy between the ideal of the "Promised Land" and the "Real America" is one of the driving forces behind the album. All of this wasn't surprising as the band toured constantly through the US since its beginnings and these issues already provided inspiration for their previous records, most notably in The Unforgettable Fire (Island Records 1984). The Joshua Tree represented a different creative landscape for the band. It was a marked departure from their previous efforts and it showed a new level of maturity both in their writing and performance. As such it was also far removed from the standards of the '80s pop or rock music.

The resulting album was a politically and spiritually charged record where difficult and heavy subjects stood shoulder to shoulder with subjects of intimacy, matters of the heart, and the geography of America's wide-open spaces. It was a record that took its listeners to some dark locations. The songs had strong cinematic qualities where every nuance, meaning, symbolism, contrast, and contradiction were carefully and spontaneously interwoven into the fabric of the songs. They brimmed with lyrical ambitions but despite the status it enjoys today, this record's weighty aspirations were fueled by introspection. But it is Bono's rich, soaring voice that imbues every song with drama, meaning, and grace and elevates it to a different and higher plateau.

The songs deal with quests for spiritual and personal transcendence or questioning one's faith in times of upheaval and strife. This is heard in songs such as "Where the Streets Have no Name," "I Still Haven't Found What I'm Looking For," and in "Bullet the Blue Sky" where the song portrays the horrors of US' intervention in the civil war in San Salvador and the business side of wars. Edge's guitar perfectly captures the sounds of jet airplanes as they bomb villages and the ensuing panic of the refugees. "Exit" deals with gun violence and extremism as told through the thoughts of a serial killer. "Mothers of the Disappeared" deals with the sorrows of mothers whose sons were abducted and assassinated by Chile's regime led by Pinochet. Other songs are about the tribulations of love as in "With or Without You," where the main protagonist is torn between the bright lights of stardom and the marital life, and the quest for love as in "Trip Through Your Wires." Spirituality is also referenced in the song "In God's Country." Despite its heavy subjects, The Joshua Tree is an album of hope amid the darkness that lurks beneath.

The music is hypnotic—the songs captivate and lure you in to search for the secrets that are hidden deep within its atmosphere. Its effects and details are such that it requires close attention, yet also it welcomes listeners to lose themselves in it. The spiritual themes fit perfectly with the desert and the album's visual imagery that was inspired by Anton Corbijn's photographs of the band in the Mojave desert near the iconic tree. After all, the desert is inherently spiritual, with open and desolate spaces that inspire quiet introspection and contemplation. But also it was the dynamic production of Brian Eno and Daniel Lanois that maintained the cinematic or painterly qualities in the songs where the subtleties of the notes and ambiances mattered as much as the precise notes themselves; indeed, the textures and the resonances sometimes carried the songs as much as anything else. In general, these songs are evidently guided by an invisible internal thread to be more evocative, regardless of what that evocation was in the first place.

But the point of this book is not to ponder only the past but to show how these songs and the issues it addresses still resonate strongly today. When in 2017, U2 decided to revisit its landmark work for its 30th anniversary (and again in 2019), apart from the nostalgia trip, some of the reasons were that the album's societal and personal concerns that drove the songs were still present. The same destructive elements the band addressed in the '80s during Regan's era, surfaced bitterly again in the Trump era: Trump's racist nationalism and the attack on democracy, the vitriolic political divisions and a painful reckoning with systematic racism, the pandemic and the climate hazards.

For the author, the story about The Joshua Tree and what it represents obviously resonates deeply and strongly. The book is multilayered, and on one hand, it is a story about this significant cultural artifact. But, on the other hand, this book is Morgan's quest or personal pilgrimage in search of his own individual identity in the 21C and the identity of his collective. It's as if he is on a mission in search of some of the ideals that this album stands for. In that quest, we all look for ideals as our guiding light in these treacherous times; The Joshua Tree stands as a beacon of light and a sign of hope in this chaotic world.

As a record, The Joshua Tree is a great work of art that was relevant 30 years ago and has kept its relevance to this day. The artistry and emotions still resonate and sound as authentic and groundbreaking as ever. Even though that period of the band's history is well documented, it still defies easy analysis and as any great music, it can only be experienced at the most individual level. As for the book, U2's The Joshua Tree: Planting Roots in Mythic America is thoughtful, illuminating, well-researched, well-structured and well-written. Morgan diligently sifts through a myriad of sources such as various interviews, books, and documentaries, and digs deep into the narrative thus providing a fresh insight into this great record and what it stands for.