BY JEROME WILSON
August 6, 2021
Sign in to view read count
The prolific bassist and composer William Parker has been making music with groups of all sizes and configurations for decades, Here are two new releases featuring him in wildly divergent trios. 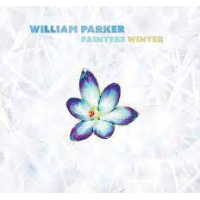 On this CD Parker teams up with two long-time associates, multi-instrumentalist Daniel Carter and drummer Hamid Drake. Parker has been working with Carter since the '80s in the group Other Dimensions in Music and playing with Drake in various settings, including duets, for over twenty years. As a trio the three musicians grind over thick, high-stepping grooves for most of this CD. Parker and Drake dance together in infectious shape-shifting rhythms on "Groove 77," "Happiness" and "A Curley Russell" while Carter wails along on various lead instruments. He plays subdued trumpet and rich tenor sax on "Groove" over a splashy rolling beat, purrs low-key alto sax over a bolero-funk hybrid on "Happiness" and rolls out Ornette Coleman-like blues cries on alto over strutting bass-and-drum patter on "A Curley Russell."

The trio shows a more exotic side on the CD's other two tracks. "Painters Winter" has an airy dialogue between Carter on flute and Parker on trombonium while "Painted Scarf" is a entwined tapestry of clarinet by Carter and shakuhachi by Parker. Drake fills in the spaces on these pieces with delicate percussive sounds. These three musicians put out a familiar but stimulating brand of modern jazz on this album.

In this trio Parker mixes it up with two musicians of a younger generation, guitarist Ava Mendoza and drummer Gerald Cleaver. This time his nimble bass lines are in support of dazzling, heavy guitar fireworks. Mendoza has been around for a few years, working with people like John Zorn and Moppa Elliott but here she gets to go all out with wild, jazz-metal guitar flights that stand on the shoulders of guitarists like Sonny Sharrock, Larry Coryell and Norwegian player Hedvig Mollestad. Parker's earthy bass lines are a grounding force here while Cleaver's drumming constantly moves and adapts to the group mood. He is an important factor whether he is shaking out a rumbling Middle Eastern beat on "Mayan Space Station" or chattering his cymbals over Parker's tarry 5/4 patterns on "Rocas Rojas."

Mendoza's playing is not simply loud. It can be both intricate and versatile. On "Canyons Of Light," she goes full psychedelic, her guitar droning and whining against a cloud of groaning bowed bass and rattling cymbals, the trio sounding like the Grateful Dead in full acid trip freak-out mode. On "The Wall Tumbles Down" Mendoza first continues the spacey drones. Then, as Parker's and Cleaver's hustling beat kicks in, her chords chop off abruptly, a country twang seeps in and traces of Duane Eddy and Bo Diddley appear in the furiously boiling music. This is freewheeling but disciplined cosmic guitar jamming of the highest order. If Sun Ra had ever wanted a heavy electric guitar sound in the Arkestra, Ava Mendoza would have been perfect for the job.