By JOHN EYLES
February 14, 2020
Sign in to view read count
Tokyo-born Yoko Miura took classical piano lessons from the age of 5 to 18. Inspired by players such as Thelonious Monk, Eric Dolphy and Paul Bley she took classes in jazz. She was soon playing concerts in Japan with players like guitarist Ryouichi Saito, percussionist Jyunzo Tateiwa and shamisen & bassist Noribumi Uchida. By 2001 she was playing overseas as well as in Japan. Following a European tour in 2003, she forged links with many European players and she has been a regular visitor to the continent ever since. She has said of her playing with others, "It's like we're traveling on parallel paths to a destination. We communicate with each other by feeling and instinct. Personally, I take in sounds not as musical notes or chords, just as energy or vibration. I put several tones into our musical field and watch the chemical reaction. It'd be a kind of adventure." The two trio recordings below are evidence that such sentiments still remain strong...

Sverdrup Balance is the name of the trio of Miura on piano, English electronicist Lawrence Casserley (who is also a member of Evan Parker's Electro-Acoustic Ensemble) signal processing, and self-taught Belgian voice artist Jean Michel van Schouwburg. Before this recording, the three had played together in October 2014 at John Russell's monthly Mopomoso improv gig at the Vortex, London. Casserley & van Schouwburg had recorded the duo album Mouthwind (HEyeRMEarS/DISCORBIE, 2010), and Miura & van Schouwburg had recorded the duo On the Shore of Dreams (FMP, 2017). So, no introductions were necessary on October 26th 2018, when Sverdrup Balance gathered to record this album at two venues in Brussels (the opening and closing tracks in concert, at Cellule 133; the tracks in between at Pianos Maene Concert Hall.)

The trio's own metaphor for their music appears in the sleeve notes; it explains the group name and is impossible to argue with: "The Antarctic Circumpolar Current, flowing at 125 Sverdrups, is the largest oceanic current, flowing past, around and through the archipelagos and islands. The currents divert, interweave, dive from the surface to the depths and rise again unpredictably, just as in our performance we constantly vary and interweave our relationships with each other and with the group."

In part, the group's varying and interweaving are attributable to van Schouwburg who always displays the variety of his vocals and techniques as well as great breath control; one minute he can be rhythmic and alliterative, the next producing hissing, spitting and breathing sounds, before morphing into a cartoon character or inserting an operatic flourish. Besides comic elements, he delivers melodic, harmonious singing as a reminder of his musicality.

Doubtless not wishing to be the serious supports to van Schouwburg's comic turn, Casserley and Miura nonetheless do provide stability when it is needed, as well as inserting their own unpredictable elements and flourishes when appropriate. Throughout, there is ebb and flow between the three with none of them being typecast in a particular role. As a trio, they work well together. 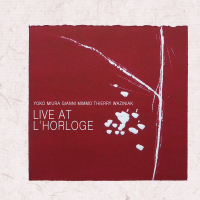 As with Sverdrup Balance, above, the trio of Miura on piano, Italian soprano saxophonist Gianni Mimmo and French percussionist Thierry Waziniak can trace its origins back to an earlier meeting, in this case the 2015 duo recording Departure (Setola Di Maiale, 2016) by Miura and Mimmo. Recorded in concert at L'Horloge d'Ollencourt, Tracy le Mont, France, on November 9, 2018, and running for over sixty-eight minutes, Live at L'Horloge is in stark contrast to the trio above. All three trio members here play instruments, with Waziniak largely in a subtle support role, while Mimmo's saxophone is in the spotlight for much of the time. He is a fluid, fluent soloist with a good ear for a melodic phrase, so his solos make good listening. Miura acts as accompanist for much of the time—fitting, as she is credited with composing the pieces played at the concert, and clearly knows how she wants them to sound; she adds in her own melodic fills occasionally—not substantial enough to justify calling them solos, but very welcome and pleasing.

The interplay between Miura's piano and Mimmo's horn continually attracts attention and is one of the key features of the album, most notably on the album's three extended tracks which each clock in at over ten minutes and afford all three players the opportunity to stretch out. This album is a good companion piece to Isla Decepción as the two together give an all-round picture of Miura's talents.