By GENO THACKARA
February 14, 2020
Sign in to view read count
There actually isn't a piano to be heard anywhere in this batch, but the season's crop illustrates the ethic of Red Piano Records in some interesting ways nonetheless. The small Brooklyn label specializes in music offbeat enough to require some adventurous ears, comfortably rooted under the jazz umbrella while usually stepping at least one foot somewhere else.

Gabe Terracciano's biography informs us that his violin skills began with classical training before he drifted into milieus like rock, jazz and bluegrass. Then again, cue up his debut album and you can hear all those things without needing to read about his background at all. The opener alone covers almost-ambient chamber folk, Latin-tinged dance and chaotic breakdown. The subsequent tracks (all originals) only continue running down the checklist in similarly fun fashion.

Adam Rogers makes an excellent foil providing soft-toned guitar with more than a touch of John Abercrombie to it, holding his own in a lighthearted game of hopskotch with the leader in the following "Way Off." Most tracks also add saxophone as things travel from snappy funk to off-the-wall improv; the bouncy bookends hit the jazziest grooves with the further addition of some trumpet. Somehow, in any mode, Terracciano's string work always keeps a touch of cool class amid it all. In Flight is an impressively sharp-swinging debut with plenty of further promise. 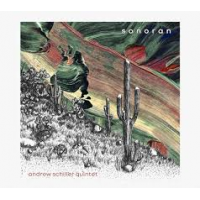 The southwestern American desert isn't the first thing anyone immediately brings to mind when they think of horns and double bass. Still, if Andrew Schiller has a specialty, it's producing unique musical pictures using elements both familiar and unexpected. He showed a sharp acumen and illustrative compositional style with his debut Tied Together, Not to the Ground (Red Piano, 2017). Here he wanders even further afield in more ways than one, dropping the piano for a lineup of chordless instruments and a set themed around the natural beauty of his Arizona birthplace.

Sonoran evokes these pictures most through the construction of each piece itself: helped by a handful of hazy "Theme" interludes. "Wet Hair, Dry Air" wafts like a breeze between warm and cool; "Thorny Flora" staggers its sometimes steady pattern with the semi-irregularity of cactus spikes. In each case Schiller puts the mood front and center, puts his fellow players in a supporting role for the songs, and essentially casts himself as support for their support. His bass and Matt Honor's drums add shading as much as actual beats, while the triple-horn line reflects nature in ways wild or refined. It's a recording that portrays not just the picturesque quality of the desert but the un-tameable spirit—harsh or beautiful, it's distinctive and often alien terrain that has to be taken on its own terms. 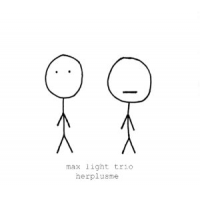 For a recording themed around childhood memories, Herplusme sure sounds pretty grown-up. It's fitting for Max Light's trio, however; they're nothing if not playful, even though the writing and musicianship are backed up by decades of experience. The opening "Boy" is a rhythmic obstacle course that finds Matt Honor (again) and Simón Willson taking staggered steps alongside the leader. It's meant to illustrate the idea of exploring, though, and so the piece gradually finds its form before slowing down to a comfortable stop. The following titles generally stay as simple as their guitar-trio instrumentation, illustrating a series of further vignettes through the song arrangements and good-humored play.

A couple snapshots evoke plain melodies and feelings common to youg'uns everywhere. It's certainly not all about childhood; a minimalist read on "All the Things You Are" has them sharply improvising over the song's partial framework after some pieces are omitted. "Baby's Hard Times" gives them the hardest time in meter and structure, though the sweeping build of the resulting love song is well worth it. The smart writing stays front and center while the players' performance brings their colorful mini-scrapbook to life with warmth and subtlety.

Tracks: In Flight; Way Off; Pundit; When I'm in Your Arms Once More; Case in Point; Alfie's Lullaby.