Dialectical Imagination: Two Infinitudes; The One You "see" and the One That Is You.

By GLENN ASTARITA
November 16, 2018
Sign in to view read count 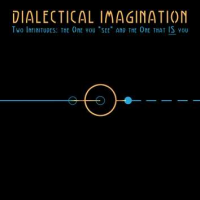 Indeed, the band moniker, Dialectical Imagination, is significant from an opposing forces standpoint. Yet for the most part the musicians are a team via these four galvanizing semi free-form jaunts. Besides the torrential currents, Wallace shrewdly injects melodic contents within the contents of these largely pounding experimental blitzes, complemented by the pianist's swirling chord clusters and the drummer's profound cymbals and toms patterns. But Pumpelly is also a colorist. And during "Vanished" Wallace's seemingly possessed state of being incorporates a light-speed percussive attack with overtones that may suggest the workings of a renegade classical concert pianist. Here, the duo illustrates their muscular improvisational abilities, also powered by Pumpelly'a rolling and tumbling progressions across the toms as a mechanism to complement and mimic his partner's barbarous flurries.

"Rungs" and "Infusion" are tour de forces, featuring knotty unison choruses with a briskly executed melodic groove and a whirling improvisational episodes as Wallace instills a heightened sense of urgency. On both tracks the pianist moves forward with unrelenting force as the duo rotates between a conventional, modern jazz vamp within a scenario that may suggest an impending disaster for all earthlings. With asymmetrical parts consisting of Wallace's harmonically appealing sub-grooves, neo-classical madness, Cecil Taylor—style freneticism and Pumpelly's poetic polyrhythmic drumming and tribal beats, the presentation whizzes by quite rapidly. You may find yourself gasping for air by the time it's over.

Title: Two Infinitudes; The One You "see" and the One That Is You. | Year Released: 2018 | Record Label: Leo Records

Dialectical Imagination CD/LP/Track Review Glenn Astarita Two Infinitudes; The One You "see" and the One That Is You. Leo Records Eli Wallace Cecil Taylor