The Dan Banks Quintet: Two in a Box

By JACK BOWERS
September 20, 2017
Sign in to view read count 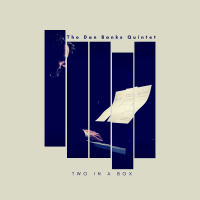 Banks wrote the charts, seven in all, presumably with that exceptional era in mind, traversing a landscape whose early explorers included the precursors named above while always taking care to broaden and ennoble their exemplary footsteps. "The Strut," to cite one example, would have been right at home in Morgan's book. As for the others, the attentive listener may no doubt discern clear evidence of their artistry in "City Screen," "Wheeler's Wise," "Two in a Box" and in fact throughout the album. Banks' chordal sequence introduces the well-grooved opener, "Duntitled," which sets the scene for what is to follow.

That includes "The Strut," reminiscent of Morgan's "The Sidewinder," which precedes the earnest "Wheeler's Wise" and "Helm of the Fallen Hero" whose intensity is underscored by Manzin's muscular tenor and Banks' forceful piano. "City Screen" is next, and here again its bop-centered nature is epitomized in apt solos by Banks, Higgs and Manzin. "Gettin' Past It" offers more of the same, with Banks' upbeat piano setting the pace, while "Two in a Box" evokes the sort of funky bop that embellished many an album back in the day. Banks and Higgs are at their swaggering best here, enheartened by admirable support from bassist Jose Canha and drummer Joshua Law (another hallmark of the session).

In sum, an ardent and colorful salute to an era whose like won't be seen again, splendidly renewed by a quintet that honors the past by affirming that the import of its music really is timeless.

Duntitled; The Strut; Wheeler’s Wise; Helm of the Fallen Hero; City Screen; Gettin’ Past It; Two in a Box.