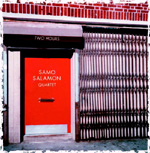 Next time you find yourself underwhelmed by a jazz recording on an indie jazz label, it might be entirely the fault of the artist—some people make bad records, after all. That said, the whole system might be the culprit: small labels offer musicians opportunities to do sessions, but don't (and usually can't) give them what they need most to make a proper album: time. Time is money in the studio, of course, and rehearsal must occur on the artist's dime before the studio date.

Slovenian guitarist/composer Samo Salamon alludes to these sorts of conditions in the title of his new quartet CD Two Hours—that's how long the album took to record after the band (composed of Salamon, bassist Mark Helias, drummer Tom Rainey and tenor man Tony Malaby) managed to eke out one amp-free rehearsal and one live gig.

Fortunately, that's how these guys operate—at least one of them's probably playing a New York gig tonight under the same sorts of circumstances—and you'll have to strain pretty hard to find any slackness or stumbling in the playing on Two Hours, a bracingly tough yet ultimately melodic collection of ten Salamon originals.

Salamon had an apprenticeship with John Scofield in 2000, and you might hear some Sco-tone in his electric guitar playing, but his slightly overdriven sound, light, brisk touch and jagged, mild-dementia phrasing's his own; if he resembles anyone at times, it's a more jazz-inflected Marc Ribot. In any case, his jaggedness is just the bitter coating of a sweet musical pill—he's really a melodist at heart. Salamon's tone blends marvelously with Malaby's robust tenor lines, and the two contribute memorable unison heads to "A Melody for Her and "Does David Know He's Not Brown? —just to name a couple.

"Empty Heart, the CD opener, is, simply put, one of the best songs of the year, with a delicate, simple theme that Chet Baker (or any of his European ECM trumpet brethren) would love. Helias threads the track with augustly deep, woody lines that sound eminently wise—both before, after and during his a cappella solo that is slowly joined by Malaby, then Rainey and Salamon.

Malaby and Salamon bite off the cagey theme of "A Melody for Her with real gusto, and the group's sudden, telepathic shift from a looser time into a straight 4/4 swing during Malaby's solo emphatically undermines any claim to the band being negatively affected by underrehearsal. Here and elsewhere, Salomon's single-note, non-chordal lines act more like a horn than guitar, and, horn-like, he often lays out during Malaby's solos.

"Silence of the Poets is a strange blues with an incantatory, improvised drums/arco bass introduction and, later, a deep-emotion Malaby solo that's buttressed by whining volume swells and feeback groans from the leader over autonomous bass and drums. It's a perfect, satisfying blend of beauty and noise.

The music on Two Hours rises above the circumstances of its creation. You'll be hearing more from Salamon.