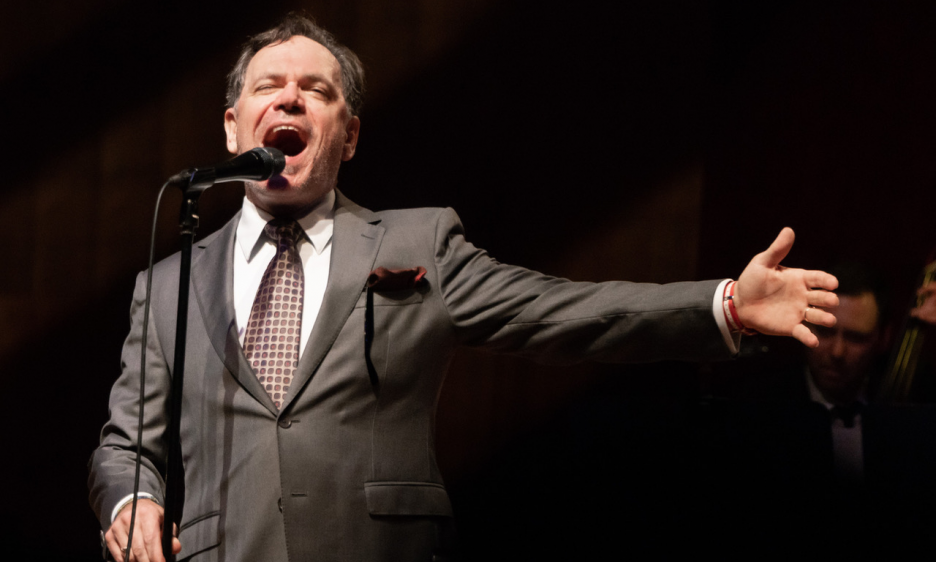 Held in the historical Lisinski concert hall, the 12th Zagreb Jazz Festival—directed by the tireless Dražen Kokanović-unfolded over three days, although this review covers only the first two, which featured Vijay Iyer's trio with bassist Linda May Han Oh and drummer Tyshawn Sorey, and Kurt Elling with the ZJM Big Band Orchestra.

Traveling with the ZJM Orchestra was a blast but the road from Skopje to Zagreb was a long one, full of delays, so this reviewer missed the first 15 minutes of Iyer's concert. Upon entering the concert hall, Iyer's trio was already in full flight, showing its remarkable range and almost telepathic communicative abilities. The set ranged from music of intimate delicacy to stunning virtuosity.

Presenting the music from his album Uneasy (ECM, 2021) for the first time, Iyer managed to create a balance between the spaces and the details that constantly prompted impressive responses from Sorey and May Han Oh. Each of them is a master on their respective instrument, with a distinct voice. The way they were communicating resembled three planets orbiting around each other in delicate alignment. Iyer's compositions are often relatively complex, unusual creations with original melodies and subtly shifting rhythmic patterns. During the lengthy improvisations it felt that the trio was constantly expanding its boundaries.

The best jazz trios can create something that is greater than the sum of their parts and Iyer, who is a pianist of cultivated taste and erudition, played on the individual strength of his trio. It was interesting to see the basic setup that Sorey used—just a snare drum, a high-hat, two crash cymbals and a bass drum. Yet the rhythms that he laid down were far from one dimensional. Together with Mah Han Oh, he responded immediately to Iyer's improvisations and the grooves and pulses kept evolving and mutating throughout. This in turn provoked Iyer to play beautifully and excitingly and it showcased what he is capable of when his imagination comes alive. Vijay Iyer Trio's performance for the opening night truly provided one of this year's most transporting musical moments.

The second performance at the Zagreb Jazz Festival featured the renowned jazz vocalist Kurt Elling and the ZJM Big Band which took place at the Lisinski's large concert hall. As fate would have it, it was the right evening for a ZJM performance with singer Elling as the stars aligned well for what turned out to be a spectacular celebration of music and of that most extraordinary instrument, the human voice.

The Lisinski audience heard why Elling earned those Downbeat and Grammy awards and nominations and learned why fans rave about his shows. His voice is powerful enough to fill a hall as large as Lisinski, but it was his gracious stage mannerisms and the warmth of his voice that turned the concert hall into an intimate club. For 80 minutes, led by conductor Dzijan Emin's studious eye, the big band and Kurt Elling showcased their distinctive storytelling gifts, enveloped by richly detailed arrangements. The ZJM Big Band kick-started the proceedings in impressive style with a playful original written by drummer Goce Stevkovski, "Monday," which set the mood for the evening.

Elling's arrival on stage signaled a change of course and focus, and with "Steppin' Out" the dynamics kicked into another gear. His singing amounted to a vocal tour de force as he delivered more melodic embellishments into his phrasing than one would think possible. Once the band entered, Elling rode its dynamics and beats with ease.

Every song in the repertoire was a highlight and a journey through jazz history—the audience was treated to a night of jazz classics with songs like "I Can't Give Anything But Love," "I Like the Sunrise" "Tootie for Cootie," "You Are Too Beautiful" "Lil Darlin'" but the highlight was arguablyColtrane's "Resolution." Not only is this song beautiful on its own with its delicate melodies but also his singing was impressive and really lit up the audience. In every song, he gave all he got and in his interpretation, Elling brought new meaning to the lyrics. It seemed that he was not only following the words but his own musical imagination which imbued the songs with grace and intensity.

Elling's generosity towards his bandmates was evidenced right from the off as he named all of the soloists (Kiril Kuzmanov on alto sax, Trajche Velkov on trumpet, Arnau Garrofe Farras on tenor saxophone and Gordan Spasovski on piano) and other band members. The big band must deservedly be awarded huge praise for its efforts. They played with joy, swing and constant excitement. After all, this is a stellar line-up of Macedonia's top classical, jazz, rock and session musicians. ZJM stands for "Združenie na Jazz Muzičari" (Association of Jazz Musicians) and has been active for 6 years. Founded by veteran drummer Goce Stevkovski and alto saxophonist Kiril Kuzmanov, it is driven by a love for music. Its previous performances indicate its broad stylistic compass—so far it has given concerts mainly with music by a varied selection of artists such as Radiohead, the Beatles, Frank Zappa, a selection of Macedonian jazz composers, or original compositions by Dzijan Emin.

Elling ended this spectacular evening with two classics from his repertoire—"Nature Boy" and "My Foolish Heart." As was evident, he is a sensitive interpreter of the standards repertoire and his voice truly caressed, embraced and exhorted the audience. The performance received a prolonged, enthusiastic reception in a nearly-full Lisinski hall. It was heart-warming to hear top artists performing standards with such insight, care and sensitivity.