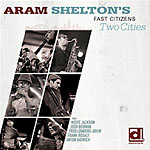 One of the core strengths of this group is its ability to transform the shape and texture of a composition, doing so with a subtle shift of timbre and nuance—perception being the key factor. The pulse is a consequence but it does not strictly direct the group's path. The music is full of delicious slabs of surprise, spun with intriguing delight.

"In Cycles" is as good a name Fast Citizens can ascribe to its music as a whole as well as to the track, where time is left wide open and silence is as telling a messenger as the instruments that jump in to fill the well of quiet. Call and answer gives way to the probing interlocution of Shelton's clarinet, the mood enhanced by the shimmering cascades of Frank Rosaly's cymbals and Anton Hatwich's underpinning bass. Cellist Fred Lonberg-Holm scatters the introspection of that narrative with edgy intonations before the horns come in and take the music out in a fiery climax.

The extent of the band's technical grasp is seen to advantage on "Big News." Lonberg-Holm initializes a classical air and the horns herald a fanfare in perfect syncopation. Jackson and cornetist Josh Berman divest the melody of its translucence, with Berman bopping in on interlocking lines. Shelton intensifies the interaction changing the complexion of the composition, and genres eloquently melt into each other.

Composition is given its due and then scattered on "The Twenty-Seven." Berman smears his lines, the rhythm section rumbles, and the cello plays scattershot lines. Just when it seems that free jazz rules, Shelton brings out his alto saxophone and plays a captivating melody that seeps into the soul of the tune.

With their imaginations roaming wide, the Fast Citizens illuminate how composition and free jazz can be brought together in context to create several magic moments.

Two Cities; Big News; Western Promenade; VRC#9; In Cycles; I Am Here, You Are There; The Twenty-Seven; Wontkins; Easy.