Ricardo Pinheiro: Turn Out The Stars—The Music Of Bill Evans 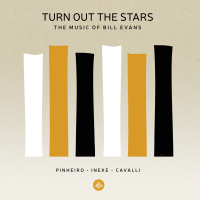 Much has been written about pianist Bill Evans and the influence he had on the development of new piano voices following his emergence in the 1950s. Evans infused his style with eloquent lyricism, coupled with harmonic transpositions and modal improvisations, all of which lead to an easily recognizable sound. It should be no surprise that his compositions carried these same hallmarks. Portuguese guitarist Ricardo Pinheiro brought his accomplished playing to some of Evans' compositions in his release Turn Out The Stars—The Music Of Bill Evans .

Supported by double bassist Massimo Cavalli and drummer Eric Ineke, the trio tackles the opening track "You Must Believe In Spring" in a delightful, dream-like fashion before settling into a mid-tempo approach to the number. There is a cohesiveness to the trio's interpretation that is a mixture of command and curiosity. The double bill of " Turn Out The Stars & Time Remembered" are an interesting pairing due to the different harmonic structures of the compositions. Lead by Pinheiro's aesthetic of unsettled color, the numbers do not stray from their inherent time signatures and thus purr along.

In 1963, Bill Evans released the album Interplay ( Riverside) on which the Evans composition of the same name appeared. In that session, the tune moved along at a smart pace with guitarist Jim Hall at the forefront of the interpretation. As conceived by Pinheiro's trio, the tune has a slower tempo, but is built around a shared vision among the members. Bassist Cavalli shows a deep tone in an extended solo and drummer Ineke is deftly imaginative with his brushwork over the drum kit.

Perhaps the most accessible of Evans' compositions is "Waltz For Debbie," due in some measure to the lyrics by Gene Lees. As envisaged by the group, Pinheiro states the theme with a solo guitar interlude. Then as Cavalli and Ineke join in, the tempo switches to double time for a few choruses, before they settle in with a solid groove in the out chorus.

Bill Evans had the reputation that he composed and played what he wanted to hear. Pinheiro and his cohorts took that to heart in their interpretation of his compositions.

You Must Believe In Spring; Peri's Scope; Turn Out The Stars & Time Remembered; Very Early; Interplay; Waltz For Debbie; Some Other Time.