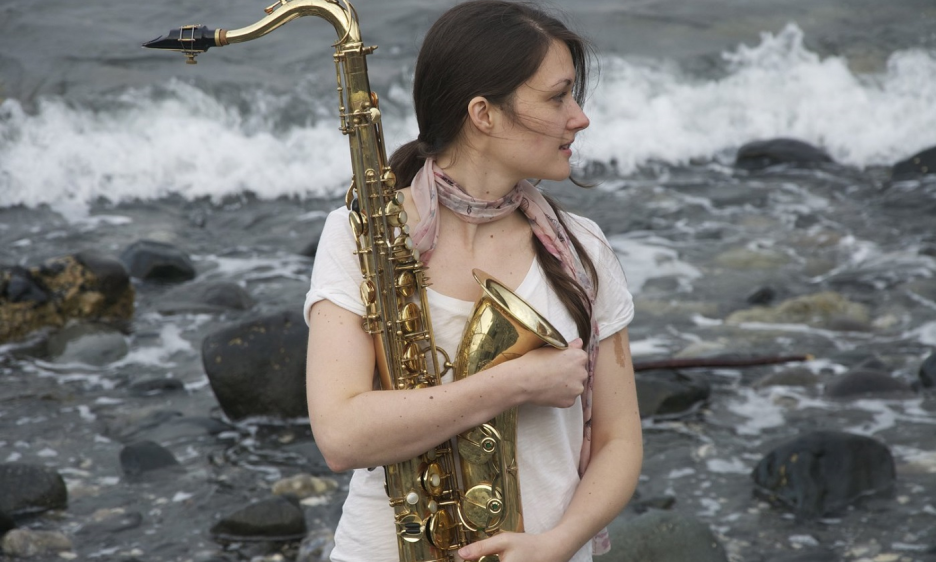 Almost five years had passed since saxophonist/composer Trish Clowes' only previous gig in Ireland, at the Derry Jazz and Big Band Festival 2013. Since then, Clowes has released a couple of well-received albums and was selected as a BBC Radio 3 New Generation Artist—a prestigious residency programme that recognizes talent deserving greater exposure. Clowes has also founded Emulsion, a collective-cum-annual festival dedicated to improvised music, which explores the meeting point of contemporary classical and jazz.

This gig—part of a six-date Irish tour promoted by Music Network—saw Clowes heading her long-established working quartet featuring James Maddren and Chris Montague, and newcomer Ross Stanley—three of the UK's most in-demand musicians. Clowes was showcasing compositions from My Iris (Basho Records, 2017), but there were also some striking new compositions that seemed to herald a new musical direction for the London-based saxophonist.

It was with a new tune, "Lightning Les," that Clowes introduced her quartet. The brooding atmosphere conjured by Clowes' braying tenor, Stanley's shimmering Hammond-esque organ and Maddren's pattering bamboo brushes was soon submerged in fulsome organ and tenor waves, Stanley's elongated phrasing contrasting with Clowes' punchier attack. Montague's spikey, abstract improvisations then steered the quartet into more experimental and emotionally darker-hued terrain. Clowes presented her credentials as a balladeer of finesse on "In Between the Moss and the Ivy," her softly meandering soprano lines gaining potency before retreating against the advance of organ drone and Montague's gently spluttering, less-is-more intervention. Ross's unaccompanied piano meditation redirected the song towards a more introspective plane, Clowes re-entering briefly just to leave her elegant signature.

On tenor, Clowes was at her most expansive, carving out a meaty solo on the vibrant "Eric's Tune"—a new number inspired by Weather Report's Live in Tokyo (Columbia, 1972), and more specifically, the band's electrifying drummer Eric Kamau Gravatt. The quartet's inspiration passed from early 1970's jazz-fusion to the syncopated jazz rhythms of the early twentieth century with the exuberant "Tap Dance (for Baby Dodds)"; partly transcribed from a solo piece by the innovative New Orleans drummer Warren "Baby" Dodds, Maddren's infectious tap-like rhythms served as launching pad and frame for melodic to-and-fros between saxophone and guitar. The opening set finished strongly with "Be a Glow Worm," characterized by spiralling melodic lines from saxophone, guitar and organ that overlapped to thrilling effect.

Clowes' tenor was to the fore on "I Can't Find My Other Brush"; a gnarly Marius Neset-esque head bookended persuasive improvisations of distinctive character from Clowes and Montague, spurred by Maddren, with Stanley's bass lines on organ providing ballast. The slower tempo of an untitled new composition afforded greater individual space—with Stanley on piano particularly impressive—and underscored the leader's ability to pen lyrical yet dynamic narratives. Clowes switched between soprano and tenor on "One Hour," a compelling journey where organ drone and guitar-pedal ambiance gave way to sure-footed collective drive. Montague was once more in scintillating form with a tremendously fluid, melodic improvisation. Clowes responded in kind, but stuck to her own speed lane, and indeed one of the quartet's strengths throughout the show was precisely the sense of four individuals expressing themselves whilst pulling for the team.

Clowes lent caressing vocals to another new composition, "Free to Fall," which provided a set highlight. The lulling poetry of the intro, with Clowes' song cushioned by undulating organ waves, gave way sharply to robust riffing and passionate trading between saxophone and piano. Against Maddren's ever-livelier rhythms, Montague and Clowes employed pedal effects to forge a shared soundscape as ethereal as it was stirring. The audience rose to its feet to demand an encore and the quartet duly obliged with "Arise," another new number. Clowes, on tenor, carved a gently mazy, arresting course that steered the quartet from the impressionistic, stuttering opening—complete with brief circus motif—to balladry of the tenderest kind, Clowes' aching tenor soaring lightly over rumbling piano—a meeting of poetry and rhythmic drive that was the benchmark of the concert as a whole.