By DAN BILAWSKY
November 30, 2016
Sign in to view read count 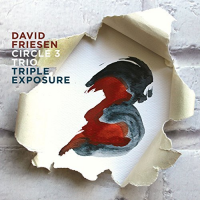 For most, a triangle is the shape that readily springs to mind when analyzing, discussing, and/or conceptualizing a trio. There's no mistaking roles and positions, after all, when there are three clearly defined sides. A circle, on the other hand, offers no beginning, no middle, and no end. In many ways it's a better analog for a band, but only if the shape fits. Needless to say, when it comes to the musical marriage of bassist David Friesen, pianist Greg Goebel, and drummer Charlie Doggett, it's a perfect fit. This trio is one beautiful feedback loop.

Friesen introduced this outfit to a wide audience with Where The Lights Fall (Origin Records, 2014)— a two-disc set of studio and live performances that lays out the Circle 3 Trio's language while also showing what it can do when a fourth party is added to the mix: guitarist Larry Koonse appeared on nine of that album's nineteen tracks, changing the dynamic just enough to provide a welcome contrast. The material that appeared there was recorded in three different locations—Germany, Arizona, and Oregon—between March of 2013 and January of 2014. It simultaneously sits well and stands apart from Triple Exposure

This album is more traditional in terms of constructional methods. The music appears on a single disc, there are no guests, and the album's eleven tracks were all recorded in one, two-day studio session. It's a snapshot of three sympathetically-aligned musicians at one particular moment in time. The titular concept—superimposing multiple images to create a single picture—is an apt parallel to draw, as Friesen, Goebel, and Doggett fold over, around, and on top of each other. Their concept clearly touches on and benefits from the freedoms passed down from the classic Bill Evans Trio, but this isn't some sort of musically atavistic threesome bound by the sounds and styles of departed masters. Friesen's music and direction are contemporary, in the best sense of the word.

The trio sharpens its tools with the aptly-named "Whetstone," an opener that comes into view with Doggett's cymbals playing against Friesen's insistent line. As the music develops, parts dovetail, signposts evolve and change shape, and all three men demonstrate how ears, reflexes, and good sense make for a perfect union. The ten tracks that follow expound on what this trio is all about. The waltzing "Turn In The Road" proves to be a logical extension of the Evans school; "Side Step" is a quietly thoughtful work, contemplative and tunnel-focused in scope yet surprising in the way the harmony moves; "Let It Be Known," a number in seven with a solidly appealing groove, builds a head of steam but never overpowers; and "Soft As Silk" is a stark reminder of what haunted beauty is all about.

Triple Exposure isn't the type of album that bowls you over on the first listen. Rather, it's art that attracts with a subliminal draw, moving deeper into the recesses of the mind with each spin.

Whetstone; Turn In The Road; Bright Light Sky; Rainbow Song; Side Step, Another TIme, Another Place; Right From Wrong; Let It Be Known; Soft As Silk; Everything We Are; Open Country.