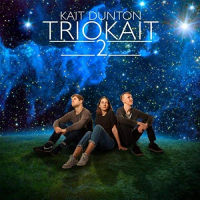 The form and function of a sequel carries certain opportunities, offering its creator the chance to return to a specific realm, broaden a theme, and further the story set forth in the original. As a result, these types of works are often judged against their launching pad productions and tethered to them by comparison. Call that a setup if you'd like, but it's also a statement of fact.

The title of this date from pianist Kait Dunton explicitly and concisely marks this as a continuation of her previous work. That's a plus, as this band was tight from the first and has since expanded and settled its sound. The same appreciation for a broad-minded fusion that existed on the group's 2015 template, and the covers album trioKAIT Casual (Self Produced, 2016), is audible on this set. But Dunton, electric bassist Cooper Appelt, and drummer Jake Reed now seem more comfortable in their collective skin. Early indicators of that fact include the odd-metered spacey prog-funk of "OCD" and the lyrically grooving "Nude," both of which are highlights here.

Dunton and company often find satisfaction in blending the art of sound collage and song, but the works of greater interest uphold the values of groove and simplicity as shot through in kaleidoscopic fashion. The perfect example of that can be found in the soulful "J&J's." That number builds from its finger-snapping base, giving Appelt some space to strut and demonstrating real growth without ever truly leaving its humble beginnings. At just over six minutes it's the longest of these thirteen tracks, but it seems to come and go in the blink of an eye.

This band is all about original music here, but it's instructive to see what it does with an established framework like "Pure Imagination." Instead of riding the song's past glories, these three transform it into a celestial ride through the stars with a dream-weaving makeover. It's both in keeping with the trioKAIT aesthetic and moving one step beyond.

While there's definitely some perseverating to be found in the music presented across this program, that shouldn't necessarily be seen as a negative. Said focal points often provide breathing room that leads to great finds, and this trio often triumphs in its bouts of electro-stargazing.