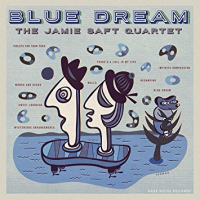 His third fairly conventional release in a row, Blue Dream is Jamie Saft's second release of this year, followup of a sort to the splendid piano recital Solo a Genova (Rarenoise, 2018). Both titles appear subsequent to a diverse string of projects including Plymouth (Rarenoise, 2014), Red Hill (Rarenoise, 2014) and Serenity Knolls (Rarenoise, 2017), none of which have much in common sonically or conceptually apart from an elevated level of collective creativity.

Similar in concept to the trio outing Loneliness Road (Rarenoise, 2017), this quartet outing contains no sharp left turn as represented by the vocals of Iggy Pop on the aforementioned record, but rather finds the foursome proceeding through a mix of originals and covers in deceptively traditional style. Blue Dream is nonetheless something of a single expanded moment of one vigorous inspiration because the twelve cuts, none of which even extend past the seven-minute mark, proceed with such seamless continuity.

As recorded by Saft with Brian Gunn, then mixed and mastered by Christian Castagno, the ambiance and realism of sound helps in no small measure to further that sensation. On the opening "Vessels," for instance, Saft's piano echoes through the swirl of Bill McHenry's tenor sax, both of which are lifted aloft by Bradley Christopher Jones' acoustic bass and Nasheet Waits' drums. The portentous "Equanimity" proceeds virtually without interruption in the carefully executed track sequence, while even a piece of outside material, "Sweet Lorraine," suggests that the stereo mix directly reflects the spectrum of emotion within the performance(s).

The ingenuity that invariably marks Jamie Saft's best work permeates Blue Dream. Yet the other three musicians are as nimble (not to mention humble) as the leader, so that when McHenry wails during "Words and Deeds," that interval is a supremely logical progression from the intense and knotty interactions that precede it and, by extension, a sterling example of the bandleader's customary recording artistry. Sounding like like nothing so much as an emotional catharsis, the cleansing purity of the acoustic piano during "Mysterious Arrangements" stands as a momentary lull for the purpose of self-reflection preceding the crescendos comprising "Sword's Water." As a result, the playful gaiety of "Violets for My Furs" is a delicious contrast.

And the restful conclusion, "There's A Lull in My Life," sounds simultaneously transitional and emphatic, all the more so as the notes Jamie Saft rings on the ivories are so clear and resonant. Befitting the overall experience of hearing this album, the words of the song's title carry more than just a hint of much deeper meaning.