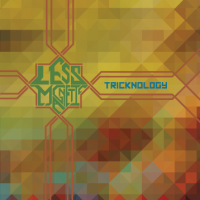 By now, making a jazz fusion record is like making a genre homage film: without in-depth knowledge of the medium's history, a strong original intention and talented people involved, it's going to come off derivative and what's worse, extraordinarily cheesy. Fortunately, Less Magnetic, who can say they sport members from multiple backgrounds like metal and Middle Eastern, are uniquely and readily equipped to take on both the letter and spirit of fusion. Throughout its debut record, influences as diverse as Wayne Shorter, The Moody Blues, Tim Berne and Simon Shaheen appear briefly enough to be refreshing, but disappear before they overstay their welcome.

Less Magnetic takes a cue from trumpeter Dizzy Gillespie in its inclusive approach, directly weaving a second style into the DNA of their overall, distinctly jazzy style. In "He is Riding a Lion, Whipping it With a Snake" (written by guitarist Gabe Marin, who is also member of fusion band Consider the Source), a sitar drone and the saxophones announce a slow, humming Phrygian tonality before kicking off a serpentine melody over Dan Kurfirst's swinging ride. "Civilized Decline" takes a cue from '70s Keith Jarrett in its quiet soul, but pianist Campbell Charshee spikes the concoction with dizzying polytonal runs over a starry electric guitar oscillation throughout. Marin, Charshee and bassist John Merritt make a distinctive rhythm section; Merritt's grooves chop up Charshee's opaque chords, which collide and make sparks with Marin's windy, ethereal guitar wails.

The compositions on Tricknology have a large but manageable breadth of complexity. The 14-minute title track goes through storybook-like stages: (1) Introduces a tidal wave of zigzagging lines; (2) Diverts into a counter line; (3) Brings in an optimistic 7/4 rock section; and (4) Whiplashes back into a combination of parts 1 and 2. Kurfirst's sets the opening riff right in the middle of a 6/4 bass pattern on his unshakably catchy "Hater Uncle," disorienting the initial rhythm until its triumphant chorus. Tenor saxophonist Ben Cohen's "Passive Resistance" starts with Shorter-esque melody/chord relation, but its spacey component deports it into psychedelic territory from which it never returns.

Each member of the group has a separate quality to offer the group. Marin is the most verbose, his dazzling gamut of techniques submerging the compositions in an ethereal glow. Charshee is equally at home with haunted house organ and Herbie Hancock-style piano, and Merritt moves with ease underneath the semi-cinematic "Gnossbor D'Charsh." Alto saxophonist Jeremy Shaskus has the icy, modern alto excursions down pat, but also shows a remarkable sense of melody in quieter moments. Kurfirst navigates perhaps the most difficult part, toggling between interplaying swing and thundering mathematics, but he does so with ease and character. As a fusion band, Less Magnetic has really committed itself to the input of things worth fusing.