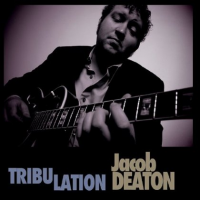 Jacob Deaton, virtuoso guitarist and Atlanta native, has assembled an energetic quintet for his debut, Tribulations. The five gig together regularly in and around their hometown, building the strong camaraderie they exhibit here, yet each has his own, unique voice. This makes the group sound like a dynamic entity in its own right, not merely the sum of specific efforts. It helps that Deaton's originals are constructed to allow for maximal individual expression.

Saxophonist Akeem Marable's Jackie McLean-inspired alto, for example, is a perfect match for the edgy and angular title track that opens the record with a bang. His acerbic and gritty tone embarks on a far-reaching, logically constructed, fiery solo that contrasts and complements the cool melancholy of Deaton's sparse and carefully played notes.

Pianist Nick Rosen's darker inflections (hinting at Jaki Byard) and earthy arpeggios flow over the laidback groove of Deaton's guitar on the modal "Hoexster's Hex." His complex and expansive monologue has a modern poem's lyricism on "Sketches of Trane," perhaps the most stimulating piece of the collection. As Deaton creates musical alchemy by mixing series of notes with silent pauses, Marable's shimmering alto sax dances in complex and angular motions over the deceptively simple structure of a melody that flirts with the avant-garde.

Deaton's laidback, loosely swinging, bluesy improvisation is the hallmark of the hard bop tune "Eclipse." His experiments with more dissonant, freer styles are heard on "Major Differences," especially during his stimulating exchange with Marable. Here and throughout the entire album, the rhythmic and harmonic structure of the music is molded by two seemingly opposing yet quite complementary forces—the propulsion of Justin Chesarek's polyrhythmic drumming and the anchoring of Craig Shaw's robust and sophisticated bass.

Although Deaton and his band have not quite crystallized their distinct style, this consistently engaging, explorative, multifaceted musical opus is a bold move in that direction.