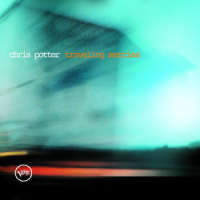 Walking in jazz saxophonist Chris Potter's shoes on his new recording Traveling Mercies may prove to be a rewarding experience for the exploratory listener. The multitalented musician has covered a lot of ground on recent tours and sessions with acclaimed recordings such as the Dave Holland Quintet's Not for Nothin' and Steely Dan's Two Against Nature. His skill as musician, composer, and arranger comes to the forefront on Traveling Mercies to give the listener a glimpse of the musical roads he has traveled so well.

The idea behind the new recording comes from the artist's reflections of recent tours as a bandleader and sideman. The listener will receive a musical itinerary that is layered with different textures and environments, which offers a modern jazz mentality. This is a departure from his previous recording Gratitude which paid homage to great saxophonists such as John Coltrane and Charlie Parker. The music now infuses elements such as sound samples, electric keyboards, guitars, and various elements to create a kaleidoscope of sound.

Potter possesses a strong tenor sound, which is throaty and deep with meaning, but it's a real treat to hear him on bass clarinet, flute, and odd instrumentation such as the reed organ. Combine this with exceptional compositional skills, and choice musicians; Traveling Mercies is a cut above the rest. Guitar wizards, John Scofield and Adam Rogers enhance the mix with progressive playing on many of the selections. Kevin Hays provides nice work on the piano and Fender Rhodes, while bassist Scott Colley and drummer Bill Stewart are a tried and true formula for tight rhythms. Highlights abound on the recording such as the atmospheric "Highway One" and the multi-textured "Any Moment Now," which is a testament to Potter's arranging skills. The recording concludes with the serene "Just as I Am," which features a lovely piano and clarinet duet.