BY PATRICK BURNETTE
April 20, 2019
Sign in to view read count 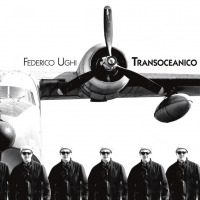 All three musicians keep busy. One of the strengths of the atonal power-trio tradition is that everyone has to pull his or her weight at all times to keep the music percolating. No "going through the motions," because the motions aren't defined in the first place. It's a kind of music that asks the listener to focus on all participants at once (or, at least, to spread his attention among them) if it is to be appreciated fully. The nice thing about a trio is that this kind of attention is at least theoretically possible. In larger atonal ensembles, sometimes the interweaving lines get so thick it is difficult to follow what is going on, but with no chordal instrument to muddy the waters, the drum/bass/sax trio is transparent, if nothing else.

Transoceanico emphasizes strength of expression over displays of virtuosity. Ughi enjoys the occasional solo, but does not spotlight himself too often or indulge in empty pyrotechnics. Lane is an agile player but not interested in strumming out lightning runs like a Scott LaFaro, and his earthy, resonant sound is well-captured by the session's engineer. Musson does remind one of Ayler, but her tone is not as querulous and her playing—driven and expressive—is not quite so tinged with apocalypse. On "Blues Agent," she reveals a more introspective side, with a tone that sounds slightly like Joe Henderson doing his best Stan Getz before she begins to growl and gurgle as the song creeps back into energy territory.

The second half of the record is considerably more introspective than the first, though on the title track and the closing "Quando Andiamo" there is always a sense that the playing could ramp up to full intensity at any moment. In general, this is a well-done and thoughtful example of "out" playing, though one could wish for more memorable jumping-off places (it features no hummable folk-tunes such as those Ayler favored) and, perhaps, just a bit more of a manic edge. Recommended for those who love atonal music with teeth.