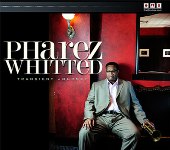 The intimidating yet dapper looking man on the cover plays his horn in the same striking manner of his appearance. Chicago trumpeter Pharez Whitted as they might say on the street, "Ain't No Joke" as witnessed by his serious musicianship— chops that are emotive, filled with technique and touch, and soulful swagger. It's hard to believe that Transient Journey is only his third release as a leader.

A musician, band leader, and educator currently serving as Director of Jazz Studies at Chicago State University, Whitted brings a vast wealth of knowledge and superior skills to the recording. It also helps to have a killing sextet that includes the stellar guitarist Bobby Broom who also co-produced the project. While Whitted's previous two recordings were released in the mid-1990s (for MoJazz, a Motown subsidiary) this set of eleven original compositions is well worth the wait.

A delightfully swinging affair is in store. Polished vamps and even smoother solos are served in "The Truth Seeker" and the title track with a chilly urban charisma that's frosted by Ron Perrillo's keyboards and Whitted's soulful trumpet. "Brother Thomas" sounds like it could've been written in the 1960s on Blue Note, ala Freddie Hubbard (a strong influence and a longtime family friend). The infectious "Monkish" is the sweet spot personified. It gets under the skin; finger-snapping music with an infectious quality and quirkiness that gives props to Thelonious Monk.

Whitted's articulation and command of his horn is as fluent and polished as contemporaries like Wynton Marsalis or Terence Blanchard and could teach younger cats such as Corey Wilkes and Christian Scott aTunde Adjuah a thing or two. His sepia-toned flugelhorn is equally impressive on "Until Tomorrow Comes" where its soft glow is suffused in the track's mellow Bossa rhythm.

Whether it's "Plicky"'s funky tempo (dedicated to his sister) or the band's swinging optimism in "Yes We Can," the set is enjoyable from start to finish. It might have taken a minute (a mere fourteen years since his previous release) but it's good to hear Pharez Whitted delivering his music once again.

The Truth Seeker; Transient Journey; Brother Thomas; Monkish; Plicky; Sunset on the Gaza; OS Who; Until Tomorrow Comes; Our Man Barack; Soul Mates; Yes We Can.