By Dan McClenaghan
January 16, 2016
Sign in to view read count 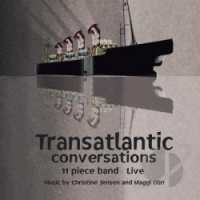 Prior to the release of her marvelous big band outing, Habitat (Justin time, 2013), Canada's Christine Jensen was probably best know as the alto saxophone-playing sister of high profile trumpeter Ingrid Jensen. Sweden's Maggi Olin's major notoriety—on the United States' side of the Atlantic—certainty came from her work as a pianist/composer for the under-recognized quintet, Nordic Connect. The two rising stars re-connect now (Jensen is the alto saxophonist for Nordic Connect) with Transatlantic Conversations: 11 Piece Band Live.

Recorded in Malmo, Sweden, by a group of inspired musicians giving it their all on a set of alternating compositions by Jensen and Olin, who are themselves—as the proved on the Nordic Connect sets and Habitat—inspired, bringing to mind Charles Mingus and Thelonious Monk and even, in some segments, Duke Ellington.

There are lush, sometimes brash ensemble sections and rip-snorting solos all around, and there are also deep, muscular grooves rolling down the road, foundations set into place by drummer Daniel Fredriksson, and bassist MattiasWelin. Then the ace in the hole: vocalist Sofie Norling, who soars with the horns in vocalese as part of the ensemble at times, scats occasionally, and settles in a sings some lyrics, too, in a distinctive modern style.

This is a band reveling in the music at hand—no studio sterility here. It's all alive and breathing, full of spirit and energy and first-rate compositions and mid-sized ensemble arrangements.