BY DOUG COLLETTE
January 16, 2016
Sign in to view read count 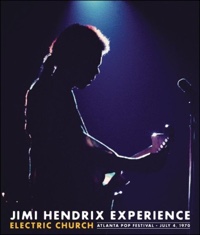 In front of the largest audience he would ever entertain, jimi Hendrix used a select few numbers from his early days-"Fire," "Spanish Castle Magic"—to erect a new persona for himself with more recently composed tunes such as "Room Full of Mirrors," his visionary cover of Bob Dylan's "All Along the Watchtower" and an abiding reliance on the blues, here in the form of "Red House:. Ably aided and abetted by drummer Mitch Mitchell and old Army buddy bassist Billy Cox, Hendrix presented himself as the contemporary bluesman he really was at this point in his career. tragically, just about two months before his untimely death.

Companion piece to the double CD Freedom-Atlanta Pop Festival (Legacy, 2015) puts this appearance in the context of the progression of the iconic guitar hero career via well-edited and largely articulate interview clips with other members of the experience, recording engineer Eddie Kramer and long time publicist Bob Merlis, The film, much of it excerpted from an impromptu plan recounted by promoter Alex Cooley, to film the entire weekend's events, leads to the concert segment itself, In doing so touching all the bases as a television documentary should (in truncated form, it was originally broadcast on the Showtime network).

Electric Church kindly references the festival's debacles, including water shortages and fractured paid admissions even as it rightfully glorifies Hendrix as a musician and a rock star. The film frames Atlanta Pop as an outgrowth of the counterculture of the times as well as the racial strife fermenting in the American south in general, a microcosm of which seems set to occur at the site, a racetrack in the small town of Byron, Georgia south of the Atlanta metropolis. Yet the simmering the trepidation of the residents on the one hand becomes balanced by their eventual generosity in the form of distribution of food and use of firetrucks to cool off concertgoers in 100 degree-plus summer heat.

Hendrix' spectacular charisma reaches its flash-point on stage as a direct reflection of the musical maelstrom he and his accompanists created in concert. Even as much of the Seattle native's antics-playing guitar with his teeth and behind his back-was the stuff of his vaunted predecessors such as Buddy Guy, the nurturing of his persona in England, so astutely noted here by Paul McCartney, gave him a launching pad to further his career from opening slots (the Monkees the most famous) to not only headlining festivals, but making a festival worth attending, not to mention presenting: Atlanta Pop was a prime example as its predecessor festival didn't do nearly as well.

Vivid as are the cover graphics and insert to the DVD, the package begs more extensive printed matter enclosed (the kitschy effects that adorn a bonus video of "Mirrors" is no substitute). Such content is available with the aforementioned audio package in the form of a pithy but comprehensive summary of the Atlanta Pop story. Yet as vivid as that is, it cannot supplant the film footage of the audience gathering for and in attendance at the show.

And though apart from shots depicting the audience waving sparklers, precious little of the crowd appears in the footage, there are flashes of the panorama of the site (given a recording close to fifty years old in remarkable clarity of both audio and video) as well as a series of iconic images, including the light show, and the fireworks display during "Star Spangled Banner," the cumulative effect of which captures the rise in momentum of the performance, beginning with "Voodoo Chile (Slight Return)."

It's within in these intense moments, culminating with the original "Straight Ahead," that the solidarity of the band, as a direct extension of the leader's fully-engaged immersion in the moment, suggests the tragic irony of his demise roughly two months from the date of this performance. Electric Church, then, becomes an elegy for Jim Hendrix.