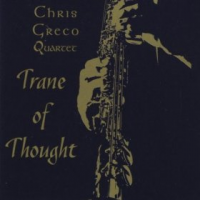 This record isn't an out-and-out tribute to saxophonist John Coltrane. The title—and title track—may suggest that it's all about that legendary figure, and the album-ending "Soul Eyes" serves as a secondary nod of affirmation, but saxophonist/multi-reedist Chris Greco doesn't just plant his flag on Coltrane's domain and call it a day. Sure, he delivers probing and edgy swing, hints of mysticism, and rapid runs that recall Coltrane's work, but he doesn't pattern his every move after the man.

The nine songs that make up Trane Of Thought travel different highways and byways, leaving this electro-acoustic crew to explore a variety of sonic realms. Greco works exclusively with the quartet format on this one, but the band often sounds bigger and fuller, thanks to the wonders of technology. Guitarist Brad Rabuchin uses a midi-synthesizer to expand his auditory outlook, drummer Kendall Kay adds conga drums into the mix, and bassist Dean Taba takes an electric approach with his upright; add to this the fact that Greco works with four different horns, and it's easy to see how four can sound like six or seven at times.

In sequencing the tracks on this album, Greco put some of the most challenging listens up front. He starts off with a nine-plus minute number that moves from free floating celestial spaces to Eastern-tinged trance soloing ("Sterope"), and follows it up with a Coltrane tribute that opens on a drum solo and moves toward a fusion-laced vision of that artist's work; this method of introduction is a programming leap of faith, but it basically works, as it helps to set an anything-might-happen tone for the record. One moment Greco and Rabuchin are digging their heels in over Kay's swinging drums ("Oliver"), and a few minutes later they're dialing it down, as Greco turns to his flute for a buoyant number ("Merope"). They take things slow and slick ("Mid-City Funk") on one occasion, and turn the lights down low as the album reaches its conclusion ("Soul Eyes"), but intensity is never too far away.

The songs that tend to stand up best feature the least amount of electro-drapery from Rabuchin; he's terrific when he's left to his own device-less devices. He usually shares center stage with Greco, who sounds equally strong, regardless of which axe is in his hands. Together they make a formidable front line that draws attention at every turn throughout Trane Of Thought.