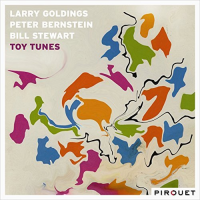 Just look at the cover art—the swirl of colors, the bodies drawn to the eye as misshapen designs, the beauteous blotches, the sturdy rhythms of angularity. In some ways it's almost inconceivable to imagine all of that acting as one, yet these images form a perfectly perceivable whole—a picture that feels like home yet sits in its own space, artfully different yet accessible and inviting. It's a perfect parallel for the work of these three master musicians, collectively viewed as the most creatively durable organ trio in jazz.

Together, organist Larry Goldings (who happened to create said album art), guitarist Peter Bernstein, and drummer Bill Stewart have been elevating the art of this musical format for more than a quarter of a century. This, their twelfth album in total and second on the Pirouet imprint, is but one more high point in a series of continuous peaks in this outfit's discography.

Toy Tunes takes off with "Fagen," a Goldings original nodding to Steely Dan's Donald Fagen. It's a somewhat sensitive offering that, while alluding to its honoree, adopts a loose vibe and a harmonic aura apart from Fagen's signature(s). Stewart's "Don't Ever Call Me Again" follows, coming into the picture with a skulking groove and a melody line that lays perfectly within its setting while also feeling somewhat displaced. It's vintage Stewart in its blend of intelligent design, rhythmic fervor, and surprise. Then Bernstein's harmonically vibrant "Lullabye For B"—a beauty of a waltz written for his oldest son—completes the album-launching triptych of originals.

Four of the five remaining tracks are covers, allowing for this trio's interpretive brilliance to shine through. "I'm In The Mood For Love" rides on the locomotive zest provided by Stewart's brush work; Carla Bley's "And Now The Queen" plays as a tale of questioning and arrival, living life on the outskirts while still remaining reachable; Wayne Shorter's "Toy Tune" offers innumerable pathways for these savvy improvisers to travel; and closer "Maybe"—of Annie fame—adopts a low key swing swagger in its step. The lone original on the second half of the album—Stewart's aptly-titled "Calm"—brings peace to the penultimate slot.

The beauty in following this trio's work rests in the fact that you somehow know what you're going to get without really having a clue. If that sounds like paradoxical play or a flirtation with the absurd, that's all the better to fit this band's vibe.

Fagen; Don't Ever Call Me Again; Lullaby For B; I'm In The Mood For Love; And Now The Queen; Toy Tune; Calm; Maybe.