Maximize your visibility at All About Jazz by upgrading your musician page from standard to premium. With it, you'll receive All About Jazz home page exposure, a highly stylized / ad-free musician page with bonus features and benefits, an ad, plus you control where you sell your music and so much more.
Learn More
292 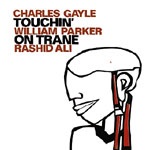 A long time ago, there was an advertising line: "The Rolling Stones are not just a band; they are a way of life." That ad man was of course tapping into the old adage of jazz: if you don't live it, it won't come through your music. In the '90s, The New Thing of the '60s came back with tremendous energy and no one embodied that energy better than Charles Gayle. At almost 70 years old, he still plays with the conviction and strength of a Coltrane or Rollins in their twenties and thirties. This CD, one of the strongest of the '90s, was out of print from Germany's FMP label and very difficult if not impossible to find, so this reissue is a cause for celebration. The music on Touchin' On Trane is for those who thought the avant-garde was the wrong direction of the '60s, even though the same musician who created "Giant Steps" was also one of its most important proponents with works inluding Meditations (Impulse!, 1965) and Interstellar Space (Impulse!, 1967).

Starting off with "Part A," Coltrane alum/drummer Rashied Ali sets up a fast tempo, Gayle's soaring tenor voice moving quickly from rapid-fire mid-register lines to higher, long notes that fly over the bass and drums, sinking to occasionally deeper honks. The focus is on the leader's relentless energy for the next seven minutes, until he drops out, placing the spotlight on bassist William Parker. Even with Ali moving to brushes, the tumultuous energy continues through the bassist's solo, which precedes Ali's Max Roach-esque lead, concentrating on the foot-controlled opening and closing of the hi-hat cymbals. When moving to the rest of his kit there is a near-bebop approach to the rhythms, snappy snare and melodies emerging from tom-toms.

"Part B" changes the sonic scenery. Gayle and Parker melodically weave between each other's lines, and Ali's active yet dynamically sensitive brushes urge lyrical ideas forward. At one point, both saxophonist and bassist play in the upper-most registers of their instruments, producing a very striking sound. And, as with many of the great composing improvisers, they bring that sound back at the end of this beautiful, balladic piece. Once it gets rolling, the energy of "Part D" proves perhaps more intense than anything played prior, and the stamina holds forth for over 27 minutes. It's as if the musicians are transported to a place beyond human limits. Parker's open G-string is tamboura-like in its drone, from which all three musicians spiral. Here Gayle's spirit is unshakable; when it appears that he can't possibly go on, he does. Even as he drops out to Ali's brushes accompanying Parker's arco bass solo, the energy and focus doesn't drop for a moment.

"Part E" is a concise summary of the entire set: the slinky counterpoint, the Ben Webster/Sonny Rollins-like tenor tone, Ali's swing, and the powerful compositional/improvisational approach of Parker—all contained here in a powerful five minutes. For the believer and non-believer, Gayle's honest, powerful approach is undeniable.