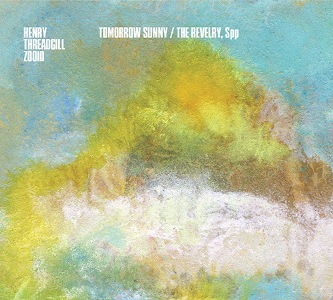 Now into its twelfth consecutive year, Zooid can finally lay claim as Henry Threadgill's longest running ensemble, having superseded the tenures of the venerable composer's most celebrated lineups, including Air, Sextett and Very Very Circus. Tomorrow Sunny / The Revelry, Spp is the idiosyncratic chamber group's fourth release for Pi Recordings, which was founded in 2001 to simultaneously release a pair of albums by the esteemed AACM multi-instrumentalist: Everybody's Mouth's a Book, by the electric Make a Move quintet; and Zooid's debut, Up Popped the Two Lips. This Brings Us To, Volume I and II were subsequently issued in 2009 and 2010, after an eight year recording hiatus by the acoustic unit.

As testament to Threadgill's leadership capabilities, Zooid has enjoyed fairly consistent personnel since its inception. Acoustic guitarist Liberty Ellman, trombonist/tubaist Jose Davila and drummer Elliot Humberto Kavee are all original members, with only acoustic bass guitarist Stomu Takeishi not part of the very first incarnation. The most notable difference between this record and the previous two is the addition of cellist Christopher Hoffman, whose inclusion restores Zooid to the sextet configuration documented on its first outing.

For the uninitiated, Zooid is named after "a cell capable of independent motion within a living organism." Threadgill has adapted this concept into a systematic series of rules to govern collective improvisation. Each musician is assigned a separate range of intervals, which facilitates melodic, harmonic and rhythmic independence from the core group, while contributing to the music's overall communal structure. The cumulative effect is a contrapuntal latticework of polyphonic harmonies, kaleidoscopic textures and modulating cross-rhythms.

Sequenced in a series of dramatic arcs, the session vacillates between myriad moods, veering from the simmering fervor of "A Day Off," to the subdued pointillism of "Put On Keep / Frontispiece, Spp." Functioning as a unified cooperative, the individual members' contributions coalesce into a shimmering mosaic, their prismatic statements ebbing and flowing from foreground to background. Some of the most expansive variations come from Hoffman, whose multihued fretwork ranges from sinewy funk on "Tomorrow Sunny" to understated lyricism on "See the Blackbird Now," which also includes dulcet trombone work from Davila and Threadgill's haunting bass flute. The leader's acerbic alto leads the brief avant-blues tone poem "So Pleased, No Clue," his trenchant testimonials setting the stage for the roiling "Ambient Pressure Thereby," which presents the band at its most vivacious, hemmed by strikingly melodic extrapolations from Threadgill and Ellman.

Bolstered by the unswerving dedication of his longstanding sidemen, Tomorrow Sunny / The Revelry, Spp continues the ongoing documentation of Threadgill's Zooid, a consistently fascinating endeavor from one of the most compelling composers of our time.