Home » Jazz Articles » Ernie Watts: To The Point - Live at the Jazz Bakery

Ernie Watts: To The Point - Live at the Jazz Bakery 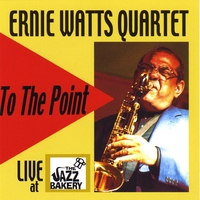 Recorded live at the Jazz Bakery in Los Angeles, To The Point is the first non-studio recording of Ernie Watts' longtime quartet. Together for over 20 years, they have a cohesion and musical empathy that is palpable. The musically eclectic Watts has toured with The Rolling Stones and played in settings from Carmen McRae to Jean-Luc Ponty. A Grammy winner for his performance on the soundtrack of Chariots of Fire (1981), Watts is best known for his work with bassist Charlie Haden's Quartet West. This set showcases Watts as a composer (all but two of tunes are his own) and a tenor saxophonist with his own uniquely warm and virile sound.

The opener is Tadd Dameron's "Hot House," easing in with a lengthy Watts solo. It's a full-voiced and lyrical passage, with Watts as Pied Piper running heated up-and-down flurries with throwaway ease. Only a master can toss off a performance like this and he does it again with "Nightscape," a Jon Mayer tune, on which Watts' smoky mood is complimented by David Witham's spare, evocative piano.

The title tune could serve as a summing up of what Watts has called his relationship to jazz. Here Team Watts is of a piece, a finely wrought assemblage of musical clockwork, Watts' flying delivery serving as the galvanizing point from which all the others flow seamlessly. The comments Watts makes between numbers are engaging and, like the music, to the point.

Hot House; Season of Change; For Michael; To The Point; Road Shoes; Nightscape; Reaching Up.