On the Buddy Rich band's album Big Swing Face (circa 1967), Ernie Watts unleashes a blazing alto sax solo on the title track that is guaranteed to send chills up and down the spine and leave listeners wondering, “How did he do that?" Now, almost half a century later, the seventy-year-old Watts continues to weave those mind-bending solos, this time on tenor sax, on Wheel of Time, a quartet date whose nine selections include four written by the leader himself ... 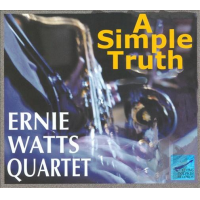 After sixteen albums as leader, two-time Grammy-Award-winning saxophonist Ernie Watts presents a concept album, a journey of sorts, a musical description of a “jazz day" beginning with a morning piece and ending with an evening song in declaration of A Simple Truth. Recorded in Cologne, Germany, with his touring European quartet--together for over fifteen years--Watts imagines the music as being “basics that connects people, going right past language, ethnicity, culture and even history, into direct feeling," which is the simple ...

The title of Ernie Watt's seventh release on his Flying Dolphin label reflects the tenor great's guiding philosophy, as he explained in a recent interview for dublinjazz.ie: “We are creating our reality all day every day by the thoughts that we think and by the things that we say and by our belief systems. It's a very clear and simple path." For Watts, this path has translated, on average, into two hours practice virtually every day for the past fifty ... 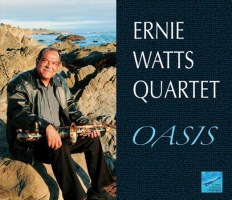 Setting up Flying Dolphin Records in 2004 has given tenor saxophonist Ernie Watts wings. After 35 years calling on an ever-changing array of some of the greatest names in jazz to play on his records, Watts has now settled into two quartets: his American and European groups. The continuity of these ensembles and the complete artistic freedom that he's wrestled free have resulted in some of his strongest recordings. Four Plus Four (Flying Dolphin Records, 2009), To the Point-Live at ...

Ernie Watts, Jeremy Monteiro & OrganamixChamber at the Arts HouseSingaporeJuly 31, 2010 As Jeremy Monteiro's composition “One People, One Nation, One Singapore" filled the air, jet planes roared at supersonic speed overhead followed by formations of helicopters. Armored personnel carriers and tanks rolled down the streets and fireworks filled the sky. This is not a typical set-up for a Monteiro gig. It had been his fiftieth birthday celebration recently and sax legend Ernie Watts ...