BY ROBERT IANNAPOLLO
January 20, 2009
Sign in to view read count 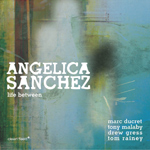 Pianist Angelica Sanchez has been forging her own path on New York City's music scene since 1995. Although she only has one release under her own name—the excellent Mirror Me (OmniTone, 2003)—she's added substance to the ensembles of saxophonist Tony Malaby, drummers Kevin Norton and Susie Ibarra, among others. She also co-leads a trio with Malaby and drummer Tom Rainey. For Life Between she has expanded the lineup of the quartet on her first disc to a quintet, with the addition of guitarist Marc Ducret.

Life Between features eight new compositions that span a wide range: from the darkly ominous "Black Helicopters" and tricky maneuvers of "SF 4" to the wistfully lyrical "Federico." Alternating between acoustic and electric pianos (a Wurlitzer that gives the music a distinct flavor), Sanchez discretely orchestrates and directs through deft comping. All the players respond with quick-witted improvisations that are always mindful of the material. There are a lot of options contained within these compositions and the musicians take full advantage of them. Malaby is a player with a big, burly sound yet he's just as effective in the quieter moments. Rainey is a masterful colorist on his drums yet when the music calls for a basic drive, he's there at the forefront. The wild card of the band is Ducret, whose adroit handling of fuzz-toned drenched lines, feedback drones and delicate melodies shows an innate understanding of and enthusiasm for Sanchez' compositions.

It's the little moments that put this disc over. On "Blue And Damson," when Malaby ends the theme with a sustained tone, Ducret picks it up with a measure of feedback and runs with it. "Black Helicopters" contains a crescendo passage with Malaby hovering menacingly over the rhythm section, becoming increasingly agitated as the volume increases. At the conclusion of "Corner Eye" the group splinters into an extended dissipating passage. Sanchez has an exciting and responsive working band at her disposal and has given them great material with which to work.