By Ian Patterson
August 2, 2016
Sign in to view read count
Jeremy Monteiro, Singapore's aptly titled King of Swing, is celebrating forty years as a professional jazz pianist and composer in 2016. These two releases span the last twelve months and find Monteiro in two quite distinct settings. The first recording, To Paris with Love: A Tribute to the Genius of Michel Legrand finds Monteiro in a duo setting with the great Hong Kong guitarist Eugene Pao, reinterpreting the songbook of the prolific French composer/arranger. Brazilian Dreams, as the title intimates, ventures into classic samba and bossa terrain. Both CDs offer a partial but rewarding insight into the myriad musical personality of, arguably, Asia's most revered jazz pianist of the past four decades. 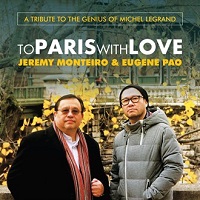 Jeremy Monteiro & Eugene Pao
To Paris With Love: A Tribute to the Genius of Michel Legrand
Jazznote Records
2015

Michel Legrand's unforgettable melodies have long provided grist to the mill of numerous jazz musicians throughout the past half century. Any list would be partial at best. Monteiro and Pao rework eleven of the Parisian composer's best-loved compositions, though surprisingly, perhaps, there's no room for "Windmills of Your Mind"—Legrand's first Grammy-winning song. Pleasingly, the duo visits less renowned Legrand material, in particular "Brian's Song," while two strong Monteiro originals sit well amidst some of the twentieth century's most well-loved tunes.

Monteiro and Pao go back together a quarter of a century to the Asian Jazz All-Stars, a pan-Asian, classic-jazz ensemble founded by Terumasa Hino. In more recent times, the pair have rekindled the spirit of that band in the Asian Jazz All-Star Power Quartet. This outing is an altogether more intimate affair, with less of the thrilling bravura for which both musicians are renowned. Instead, from the bouyant opener "You Must Believe in Spring" to the delicate "Les Fueilles Mortes (Autumn Leaves)" that closes the set, Monteiro and Pao address Legrand's melodies with the perfect balance of respectful homage and interpretative freedom.

Whether on acoustic guitar, as on "What Are You Doing the Rest of Your Life?" and "La Vie En rose," or electric guitar, as on a bluesy "The Summer Knows," Pao's caressing lyricism and blues-inflected runs are a constant delight. Likewise, Monteiro's improvisational turns, tinged with classical elegance, are also full of the blues. Monteiro's self-penned tunes stand out, not just for their original authorship, but for their quality; "De Paris a Segre" —a summery, Gallic-flavored homage to the Segre Jazz Festival—features a string quartet arrangement by Christian Howes, while the tender ballad "Seul a Paris" carries the hallmarks of Legrand's influence—and a little of his magic.

The set is rounded out by two vocal numbers: Monteiro unleashes his inner romantic with aplomb on "Watch What Happens," while former Count Basie vocalist Carmen Bradford and Robert Fernando—buoyed by strings—seduce with a heartfelt duet on "How Do You Keep the Music Playing?" Bradford interpreted this tune with George Benson and the Basie Orchestra on Benson's Big Boss Band (Warner Bros, 1990), and, a quarter of a century on, she still sounds remarkably good.

A wonderful tribute to Michel Legrand, this is also a celebration of the empathetic musical dialog between Monteiro and Pao, one where playfulness and serious artistic intent are perfectly entwined. 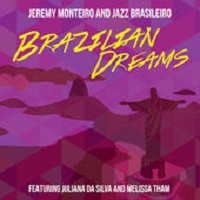 In the liner notes, Jeremy Monteiro acknowledges the great Belgian harmonica player Toots Thielemans, who recorded a number of albums with Brazilian greats that were influential for the Singaporean pianist. In effect, even if not formally stated, Brazilian Dreams is, however, Monteiro's tribute to Antonio Carlos Jobim, with no fewer than eight of the Brazilian maestro's songs included in this vibrant set. Monteiro doesn't set out to reinvent the wheel, but with Jobim's compositional brilliance addressed by first-rate musicians, the results are consistently pleasing.

Hungarian saxophonist Tony Lakatos conjures Stan Getz with his purring tenor lyricism on "Desafindao," and is equally persuasive on soprano saxophone on "Chega de Suadade," cajoled by Shawn Kelley's skipping brushes, Rudi Engel's gently swinging bass and Mario Maradei Gonzalez' percolating percussion. Monteiro, for his part, gives nuanced support throughout, though when he does stretch out on his own "Samba Apaxionada"—which sounds every inch a Brazilian classic—or on a delightful version of Luiz Bonfa's "Black Orpheus" , his dancing inventions ignite the ensemble.

Vocalists Melissa Tham—who won over the Queen Elizabeth Hall at the EFG London Jazz Festival 2014 and Juliana da Silva, are at the very heart of the album's success, singing—ever so seductively—in English and Portuguese respectively. On "Meditation," "The Girl from Ipanema" and "Wave" the two singers dovetail beautifully, finding the sweet spot between sensuous allure and passionate appeal. There are notable contributions too from acoustic guitarist Wesley Gehring, flautist Rit Xu and—with a nod to Thielemans—harmonica player Jens Bunge, who shines on "Triste" and Luiz Eca's much-covered "The Dolphin."

There may be little novelty in this Jobim-heavy collection, but it's still an uplifting joy from start to finish, and a fine addition to Monteiro's impressive discography.

To Paris With Love: A Tribute to the Genius of Michel Legrand

Tracks: You Must Believe in Spring; What Are You Doing The Rest of Your Life?; I Will Wait for You; How Do You Keep The Music Playing; La Vie en Rose; The Summer Knows; De Paris a Segre (From Paris to Segre)"; Seul a Paris (Alone in Paris)"; Watch What Happens; Brian's Song; Les Feuilles Mortes (Autumn Leaves)."