Tonight At Noon: To Mingus With Love 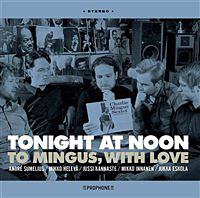 If imitation is the sincerest form of flattery, then Charles Mingus has been well and truly flattered. Tonight at Noon, a typically enigmatic free jazz piece written by the legendary bassist/bandleader, went on to become the title of a loving and extremely well-crafted memoir by his wife, Sue. Now, confusingly, it is also the name of two separate Mingus tribute bands.

The one featured here is Finnish, while the other is based in Toronto, Canada. The Finns are led by drummer André Sumelius, who studied with Tony Williams and Will Kennedy and is perhaps, best known internationally for his work with Swedish trumpeter Anders Bergcrantz's quartet.

What would the mercurial Mingus have made of the phenomenon of tribute Bands? He was never afraid to speak his mind when others made use of his compositions. In her memoir Sue Mingus recalls playing him British rock star Jeff Beck's version of "Goodbye Pork Pie Hat." She asked him, "What does this sound like, Charlie?" The great man listened for a while, then grinned slyly. "It sounds like money," he said.

To Mingus, With Love, on the other hand, sounds like five young men making a pretty good fist at eight of his compositions, with the emphasis on melody but retaining a good deal of that special "roaring" Mingus trademark.

The two standout tracks follow one another. The up-tempo "Fables of Faubus," from the Mingus Ah Um (Columbia, 1959), was the maestro at his most political: a yell of well orchestrated protest at Arkansas governor Orval E. Faubus, of Little Rock infamy. Saxophonist Mikko Innanen leads the band in on baritone, contributing an excellent if short solo. There's a longer one by organist Miiko Helevä, before Innanen returns to bring the number to a successful, roaring conclusion.

The song contrasts strongly with the lovely ballad, "Duke Ellington's Sound of Love," which Mingus recorded first on Changes One (Atlantic, 1974), five years before his death in 1979. Innanen and trumpeter Jukka Eskola turn in some fine lyrical work.

The otherwise self-effacing Sumelius permits himself some solo space on "What Love?,"but uses it concisely and well. The album concludes with "Jelly Roll," Mingus' tongue-in-cheek take on trad, which features sterling contributions by Innanen and Eskola.

When it comes to establishing communications with the wider world, Tonight At Noon may be the best thing to have come out of Finland since the Nokia cell phone.