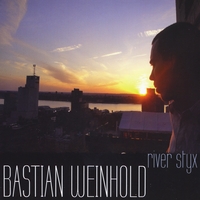 Drummer Bastian Weinhold recorded River Styx in one day in Brooklyn. It's the young drummer's self-funded debut, though he has already developed a name for himself alongside players such as saxophonists Seamus Blake and Dave Liebman, and the results are exceptional, as Weinhold brings together a series of his own endlessly intriguing charts with a quintet of great young players, including bassist Linda May Han Oh and tenor saxophonist Adam Larson.

High caliber quintets of sax-guitar-keys-bass-drums seem to be in vogue—guitarists Dave Juarez and his debut, Round Red Light (Positone 2011), also with Weinhold, and Jonathan Kreisberg's Shadowless (New for Now 2011))—and there seems to be something in the setup that gives bands the freedom to fit a wide range of sounds into their playing. A lot of influences come out here, from postmodern bop and R&B, to bebop, classical, and even pop and world music. The result is a shifting complexion within each song, handled with easy virtuosity by the five players as they switch roles.

The songs themselves are lessons in perpetual reinvention. "The Tune" opens with solo piano meandering in a slightly melancholy mount, as bass and guitar join in unison for a marimba-like sound. As sax and drums enter, the evolution takes off. The tune rises to a John Coltrane-esque mantra, called out by sax and guitar in response to the dizzying strikes of drums, before jumping into an up-tempo taste of odd meter à la Dave Brubeck's "Blue Rondo a la Turk," featuring killer solos from bass and piano. The result is a kind of sectionalized composition, blending the emotional range of an extended classical piece with a mix of popular feels, forms, and funk from modern jazz.

Larson shows a lot of fire with a powerful solo on the high octane "Kungafuh." It pairs nicely with his later statement on the brief, pastoral "Last Line," where he milks the song's complex rhythms and deceptively simple sound with delicate runs amidst perfectly chosen spaces. Weinhold shows the ability to temper the high-energy crashes and multilayered rhythms of modern playing with weighty silences and whispers of chimes. His delicate brushwork at the beginning of the title track makes for a kind of hazy, liquid serenity amidst acoustic guitar and Fender Rhodes. And when the track opens up into something bolder, he's the one powering it forward to a dark yet grooving edge of intensity.

The truth is that powerful and dynamic young drummers are all over New York these days. But albums like this—cooking with forward-thinking writing, powerful solos, and solid chemistry—are not so common. An exciting debut from a quintet of future all-stars.