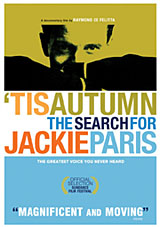 Before Jackie Paris won the Downbeat new star male vocalist award in 1953, he'd already made his mark with a Nat "King" Cole-style trio (he played guitar) on 52nd Street and toured with Charlie Parker and Lionel Hampton's big band. By 1959 Downbeat was running a story titled "Downbeat Boy Hits Upbeat" and declaring that Paris was "washed up" before 30 (he was actually 32 that year). He recorded his last LP album, The Song Is Paris, for Impulse in 1962. Critic and Sinatra musical biographer Will Friedwald, one of this film's talking heads, calls it his best, where "everything comes together perfectly." Paris also recorded with Charles Mingus on the Mingus-Max Roach indie Debut label in a setting Mingus dubbed "beatnik theater." And in the later '60s Paris teamed up with singer and at the time wife, Ann Marie Moss, touring cabarets, Playboy Clubs and jazz clubs and making one LP together. Then Paris essentially dropped below the radar, although he continued to perform and record sporadically.

Filmmaker Raymond De Felitta, who narrates this engrossing documentary in the "In Search of" style that has been a staple of documentary and fictional films ever since Citizen Kane, first heard Paris on the radio in 1991 and became obsessed with the singer. Relating that the trail had vanished by the late '60s, De Felitta assumed it ended in 1977, the year listed in Jackie Paris' "obituary." But that was before the filmmaker discovered Paris not only alive but playing clubs in 2004!

Paris would die 12 weeks later, but the filmmaker remained in the hunt, tracking down everyone imaginable—former wife Moss and even the late singer's son who'd never known him, as well as his discographer (living, like the son, in the desert Southwest), knowledgeable record collectors and critics and musicians who knew Paris, including James Moody and Terry Gibbs. Many theories are offered as to why Paris never made it big time, including his temper and ego, Mafia black-balling and simple bad timing and bad luck. Joe Franklin says, "talent is secondary to who's got the clout," as good an explanation as any. Still enigmatic at the end, Paris is last heard saying, "To be alive was to be your own person; otherwise why the hell are we here?" Footage from his 2003 comeback gig at the Jazz Standard demonstrates that Paris, who is critically recognized as one of the few pop-jazz singers to synthesize bebop, still had the talent.