BY EYAL HAREUVENI
November 20, 2012
Sign in to view read count 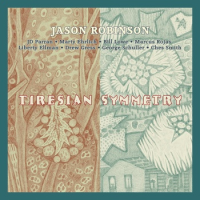 Composer and reed player Jason Robinson tends to weave his musical projects with multiple and overlapping narrative layers, and Tiresian Symmetry is no different. It is more ambitious than his previous large ensemble project, The Two Faces of Janus (Cuneiform, 2010), but still draws inspiration from Greek mythology. This time he was inspired by the mythical story of ancient soothsayer Tiresias, who lived seven lifetimes and, after a fateful series of encounters with copulating snakes, switched genders and then back again.

Robinson uses this story to explore the numerical relationship of seven (the lifetimes of Tiresias) and two (the male and female genders of this mythological prophet—the completing opposites), through asymmetric and contrapuntal structures of melody, harmony and rhythm. Interestingly, Robinson's ensemble instrumentation and arrangements draw inspiration from the influential Henry Threadgill's Very Very Circus ensemble of the early nineties, with its double-tuba configuration.

Luckily, this elaborate intellectual background does not burden the music. Robinson's richly nuanced, storytelling compositions are full of freedom, flexibility, inventiveness and humor. These compositions are performed brilliantly by a stellar cast of nine forward-thinking musicians, including reed player Marty Ehrlich, guitarist Liberty Ellman, bassist Drew Gress and drummer George Schuller, who also played on The Two Faces of Janus.

"Stratum 3," "Radiate" and "Saros" cleverly uses former Threadgill's band mates—tubaists Marcus Rojas and Bill Lowe, along with reed player J.D. Parran and Ellman, to create similarly playful and densely textured music, through propulsive and shifting meters and the inventive pairing of the soloing musicians. The title piece is structured around a hard-swinging groove, rooted by Gress' muscular playing (who also adds an inspired solo), enabling the horn players to soar freely. Robinson's emotional solo sax piece, "Elbow Grease Introduction," outlines the thick narrative for the whole on "Elbow Grease." Gress and Ellman serve as rhythmic catalysts that push the band over the metrically shifting and changing lead roles of "Corduroy." The closing "Cosmolographie" begins with a gentle duet between Robinson and Gress, but soon transforms into a colorful and balanced texture with the whole band, while Robinson and Gress continue nourishing their dense interplay.