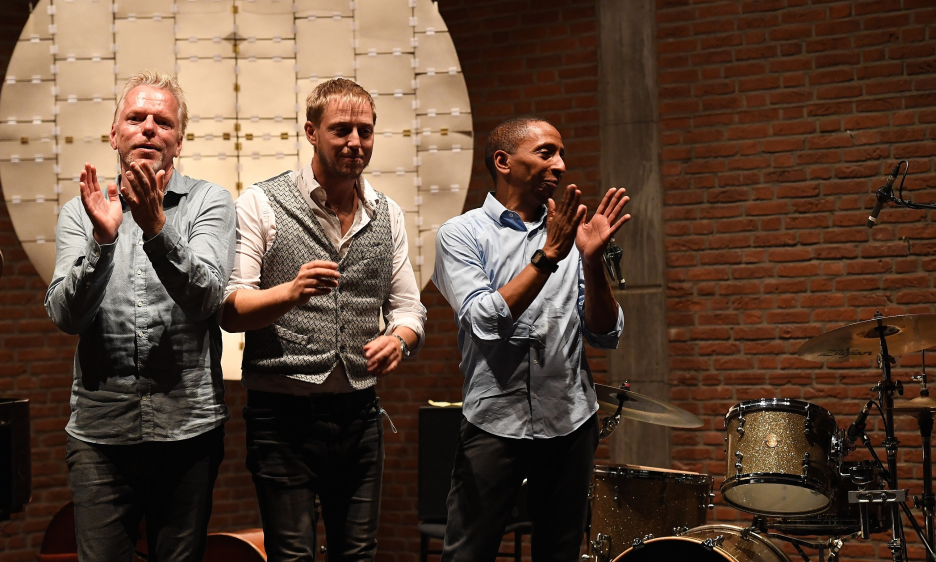 Even during a fully realized concert season, this rousing show by the Tingvall Trio would be a European circuit highlight. Coming as it did in these times of performance cancellations and postponements, the hundred minute tour de force arrived like musical manna from a benevolent jazz deity.

Since the location was a church in the Dusseldorf suburbs and the concert signaled the stirring return of a popular concert series after many months of quarantined silence, the analogy fits as comfortably as a visibly ecstatic capacity crowd did in the modified hall. Aficionados in the general area probably haven't had a chance to hear such optimal live jazz since the Moers Festival last May.

The Hamburg-based trio, featuring Sweden's Martin Tingvall on piano, Cuban bassist Omar Rodriguez Calvo, and German drummer Jürgen Spiegel, have established a growing fan base in Western Europe and tonight's scintillating set showed exactly why. Tingvall's Swedish roots and the trio format have sprouted ongoing comparisons to Esbjorn Svensson and E.S.T., but while such stereotypes are probably inevitable, Tingvall and his cohort have more than enough individual talent to achieve their own brilliance.

Most of the set was derived from the recent release Dance (Skip 2020), and while much of that globally influenced album was replicated with passionate precision, there were also many moments of apparently modified flair that made for contagious grins as the band exchanged satisfied glances. At this point amidst successful tour dates their material was obviously well-rehearsed, but noticeable touches of clear improvisation kept familiar pieces from becoming formulaic.

Rodriguez Calvo demonstrated subdued mastery on the standup bass all night long. On "Arabic Slow Dance" his bow was more pronounced than on the album, and created a deeply engaging foundation of modified phrasing adding great effect to Tingvall's sublimely circular runs. The song's elongated structure left time for Tingvall to make the most of every flourish without ever going overboard, in prime examples of adding intricate, abstract layers to a theme.

The synchronistic polyrhythms of each player as they went into high gear on songs like "Cuban SMS" and "Ya Man" were truly invigorating, while songs like "Skansk Blues" and "Movie" had such whispering fade outs you could hear an N95 mask drop during textbook samples of touch. Spiegel's minimalistic Gretsch kit was nearly identical to that of the recently deceased Rolling Stone Charlie Watts ("I was very aware of that beforehand, and especially now after all the pictures that have been posted," said Spiegel afterward), and the German drummer definitely got the crowd rocking with some whirlwind changeups between his cymbals and snare.

The penultimate "Grrrr" provided a roaring, climactic highlight and the closing ballad "In Memory" illuminated the group's dramatic range of poignancy. When they returned a second time to the assembly's steady clapping beat it seemed, contrary to most assumable pre-scheduled encores, like an unanticipated addition to an already wonderful show. There was a palpable spirit of communal energy that made the show seem far more like a shared artistic experience than a commercial exercise, a key factor in what makes a concert exceptional.

An unsung, locally recruited soundman employed an I-pad type device for an exemplary job of balancing tones in the hall's brick interior, especially during what sounded like a slightly adjusted mix that elevated soloing instruments. "Sometimes we can't tell how everything sounds from the stage, and it's often different from night to night," said Spiegel. "It was nice to hear from people afterward how they really liked the acoustics."

Tonight's gathering most definitely approved of what they heard, and the mutually positive chemistry was apparent. You could almost see everyone smiling, even beneath their non-mandatory though predominant masks.

The eastPLUGGED series is a project of USB Foundation, a charitable enterprise funded through governmental support which allows the concert team freedom to focus on high quality productions instead of a profit margin. The foundation and concerts are directed by the admirable efforts of Dr. Thomas Becker and Holger Urbach, each adept at art and business, who also coordinate an impressive range of various other social and cultural programs, many of which assist the homeless, handicapped, or refugees. The foundation was the first of its kind in the North Rhine area. A big difference in designated funding compared to many foundations is in regard to financial guidelines and expenditures.

"USB Foundation will end in 2034," explained Director Becker. "The designation gives us the possibility to finance concerts, without any third parties and thus without any claims by such sponsors; from our capitol and in the same manner we can also deal with our foundation's other charitable activities. Holger Urbach and I became directors on a voluntary basis in 2013. We discussed the foundation's three main objectives, culture, social, and environment. Holger is one of the most renowned sound engineers in European classical music and I am a jazz fan, (so) we proposed that donors establish a high-end jazz series in Ratingen."

"Reverend Thomas Gerhold had local musicians performing in the church and I recognized the special "spirit" of the room and its fantastic acoustics in particular," Becker continued. "The capacity (250-300 in non-pandemic times) is small enough for an intimate atmosphere but large enough to be distinct from a jazz club. Most of the musicians are selected by either Holger or myself, some were recommended by third parties. We try to provide the best services possible to the artists and have gained a certain reputation over the years. Nowadays numerous musicians or their agents apply to play at eastPLUGGED. Before the pandemic, all our past concerts sold out several months before the gig."

Thankfully, there are dedicated music fans like those around the small burg of Ratingen who nurture such traditions. This year will mark further growth for the endeavor as eastPLUGGED's usual wintertime festival expands to three nights at the end of October.

While COVID-19 remains a major disruption in the global live music scene, some musicians have managed to navigate the ever-changing landscape and undertake relatively busy touring schedules. Tingvall Trio's reputation and loyal fan base allowed them to book multiple dates and locations as soon as pandemic restrictions eased. Their recent itinerary has been one of the busiest in the jazz market, and it's no stretch to claim that they are reaching a level of the genre's prime performers. That's probably a reason they usually look so cheerful.

"Times like tonight are why we enjoy being musicians," reflected Tingvall. "We can perform in special settings and get to meet all kinds of great jazz fans, that's why I love this job even when it's a challenge. "

As the triumphant trio took well-earned bows and applauded in unison with their fans, it looked like the beaming musicians were just as fulfilled as the audience. Jazz remains a vital artistic force thanks in part to various uniquely invaluable locales that thrive like vibrant outposts across the globe. For a few magic nights a year during eastPLUGGED events, the Friedenskirche (Peace Church) becomes just such a place.