Martin Tingvall was born in 1974 in Schonen, a province in southern Sweden. After attending a high school for the performing arts his studies began at Skurups Folkhögskola, a Swedish form of community college, then he went on to study jazz piano, composition and improvisation at the Malmö Academy of Music. In between he completed a semester abroad in the Netherlands at the Academy of Music of the Hanze University of Applied Sciences in Groningen. In 1999 Martin Tingvall performed a 'final exam' concert to graduate from the Malmö Academy of Music. Shortly afterward he moved to Hamburg, Germany. Since then he has worked together with many well-known recording artists in his capacities as musician and songwriter in a wide variety of music genres: for instance with Udo Lindenberg, Gunther Gabriel and Inga Rumpf, to name only a few.

In 2003 Martin Tingvall founded the Tingvall Trio together with Omar Rodriguez Calvo on bass and Jürgen Spiegel on drums. Since 2006 six studio albums and one live album by the trio have been released on SKIP Records, a label based in Hamburg. Martin Tingvall has composed all of the pieces for the Tingvall Trio until now. Though increasingly well known on a national scale, their activities are not limited to Germany: The trio has received three ECHO Awards and meanwhile established itself successfully on the European Jazz scene. 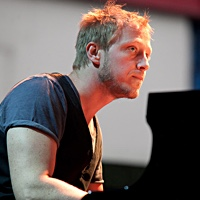 All About Jazz musician pages are maintained by musicians, publicists and trusted members like you. Interested? Tell us why you would like to improve the Martin Tingvall musician page.