By Glenn Astarita
August 31, 2013
Sign in to view read count 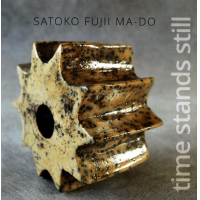 Several months after this recording, bassist Norikatsu Koeyasu died of a heart-attack in-between tours. Pianist Satoko Fujii decided that the band could not continue without his presence, citing his vital role and "telepathic connection." Hence, Ma-Do's third album will be its last. It's an unfortunate occurrence but a testament to the musicians' realization that a replacement was not feasible. The quartet's unique method of seamlessly fusing rich melodic content with asymmetrical pulses and stewing developments, saddled within the freer realm, triggers a stylistic soundscape. With striking contrasts and deep-rooted dialogues, each piece stands on its own as a distinct entity.

The band pulls out the proverbial stops on many fronts. At times, a bit gruff with these stewing developments and fractured pulses, Fujii and husband Natsuki Tamura tender a combination of striking contrasts. One of the differentiators between Ma-Do and other units skirting the free-jazz realm pertains to its inimitable unification of memorable melodies with discordant breakouts and fiery intersecting dialogues. For instance, on "North Wind and the Sun," the group implements a regimented and thrusting series of unison choruses, then venture into swashbuckling and rather brawny improvisational segments, instigated by Fujii's cascading and swarming chord clusters.

The band performs a balancing act, spanning a surfeit of emotive qualities, executing a myriad of rhythmic surprises but also instiling changeable melodies and energized thematic movements, with several reengineering processes along the way.

On "Broken Time," Koreyasu's arco lines signal moments of despair in tandem with Tamura's simmering motifs. Drummer Akira Horikoshi energizes the pace with his punchy toms and cymbals hits, as Fujii peppers the band with lower-register phrasings. Shifting the dynamic to a groove-based format, strengthened by the bassist's booming patterns, the group engages in odd-metered unison notes, countered by harmonically resplendent contours and rowdy interplay, as Horikoshi finalizes the piece with a ravaging solo. Indeed, time now does stand still for this extraordinary quartet, via its ephemeral legacy, brimming with qualitative output and discernible solidarity.