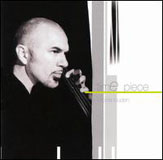 Louden is a Californian who played two other instruments before changing to bass at age eleven. After graduation from DeAnza College, he began to work with well-known pop entertainers including Barbra Streisand and Engelbert Humperdinck. Later, with his own group, he got to work with such jazzmen as saxophonists Ralph Moore, Rick Margitza and Eric Marienthal.

Time Piece turns out be a delightful mix of material, showing his writing skills as well as his chops on the acoustic bass. Three most diverting and enjoyable bossa nova tracks are inserted strategically at about one-third and two-thirds through the album, with the delicious vocal musings of Parlato, the Thelonious Monk Award-jazz singer—surprisingly not a Rio de Janeiro native, but a resident of Southern California. Ironically, Louden was able to secure Loueke, one of New York's most in-demand guitarists and an artist who worked with Parlato previously. Her presence on this album not only changes the mood but establishes a new one.

The album begins with "Gypsy's Journey" a balladic composition that actually begins with a classical overlay of violins, viola and cello. The piece features tenor sax solos from Sheppard and Louden. In contrast, "Verbatim" is taken way up-tempo with more solo opportunities for Sheppard, Louden and Simon. "Insensatez," the first of Parlato's appearances, offers not only a change of pace but some outstanding solo work from Sheppard on soprano sax and pianist Mike Eckroth with samba simpatico. "624 Main Street," an up-tempo bop tune, marks the only appearance of tenor saxophonist Seamus Blake and the twelve-minute track allows him a five minute solo.

Trumpeter Alex Sipiagin provides several well-delivered solos and is featured on "Supposition." Latin percussionist Nanny Assis (who also has a new solo album) is used to maximum effect on the album.