Home » Jazz Articles » Jambalaya Brass Band: What You Lookin' At

Jambalaya Brass Band: What You Lookin' At 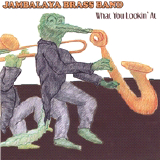 "The Crescent City" is New Orleans' nickname primarily for one reason: its shape. Starting in the French Quarter, the city's bounds expanded along the curve of the Mississippi River, giving the city a shape that is essentially that of a toenail. This is mentioned only because this expansion didn't stop there. Indeed, groups like the Jambalaya Brass Band are perfect examples of just how far-reaching the cultural influence of New Orleans remains. They look like a legitimate New Orleans brass band, and more importantly they sound like one, but don't be fooled; these guys aren't from the "Big Easy," they're from the "Big Apple."

The band, led by tenor saxophonist Ric Frank, sports a hefty load of fun-loving funk on What You Lookin' At, their debut recording. Not that these guys are amateurs by any means. Originally created in 1998 for a centennial celebration of the Brooklyn Conservatory of Music, the band started out playing covers by like- minded New Orleans brass bands including the Dirty Dozen, Rebirth and New Birth. It seems they learned well, because Jambalaya could stand side-by-side with most any New Orleans brass band in terms of sheer exuberance and energy. The album is a party from start to finish.

Things kick off with the aptly titled "Voodoo Queen" (dedicated to Marie Laveau, "the ultimate New Orleans voodoo queen"), a romp of a track complete with slinking tuba line, eerie, elongated trumpet lines and intersecting sax bumps and screams. The sound is at once tight, full of call-and-response and simultaneous theme statements, and loose and elastic. While the tuba holds down the fort, the percussion relaxes and gets a little busier, paving the way towards an increasingly energetic solo by alto saxophonist Joe Hrbek.

Three covers are present on the album—two by friends the Dirty Dozen Brass Band, and one by Booker T. and the MGs—but you could hardly tell given the strength of Frank's originals. The Dirty Dozen's "Blackbird Special" is perhaps the strongest of these, if only due to the inherent strength of the track itself, but Jambalaya brings the same raw energy to it as they do to all of the tracks. In fact, much of the group's strongest playing is present on the originals, where they seem more comfortable and thus more willing to really stretch out.

With its shouted intro, Latin-tinged theme and persistently heavy tuba work, the title track is one that makes a solid attempt at bringing what must be a great live show into the home. Indeed, much of the album exhibits that same unpretentious vibe, and the group surely seems to want nothing more than for its listeners to have a blast. Well they need not be disappointed, because with their debut recording they've done it.

Voodoo Queen; Jambalaya Brass; Alligator Ball; Hip Hug-Her; Blackbird Special; Salsa 2nd Line; Do It Fluid; Bayou Mama; What You Lookin' At?; On the Funky Side.