BY CHRISTOPHER SHOE
July 19, 2007
Sign in to view read count 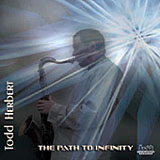 If there is one thing done right on this album, it is the entourage of musicians that join tenor saxophonist Todd Herbert: pianists George Colligan and David Hazeltine, bassists Dwayne Burno and John Webber and drummers Darrin Becket and Joe Farnsworth. Herbert's two groups add an irreplaceable touch to the album. Their distinct personal talent and sensible musicality make Herbert shine.

The Path to Infinity has an abundance of titles that lean towards the idea of the metaphysical. "The Eternal Void and "Cosmic Consciousness are two such examples of tunes that hint at an exploration of the unknown. This same type of abstract thought process seems to be as much a part of the music as it does the oblique titling. Each solo gives off the impression of an intellectual approach to the history of the music.

"Captain Hubs stands out, not only because of its dedication to Herbert's old accomplice Freddie Hubbard, but also because of its atypical funky melody that leans more towards a groove than the rest of its more straight-ahead brethren.

The Path to Infinity is a respectable contribution to the ever-growing New York jazz scene and, even more, is something that can be appreciated at many moments in life. Both contemplative and meaningful it is not something to be missed by those interested in the jazz music of today.

Chris Shoe is a musician and writer living in Southern CA