BY JACK BOWERS
September 23, 2015
Sign in to view read count 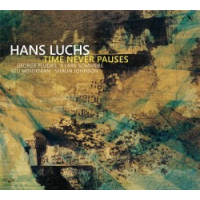 Not much can be said about Hans Luchs aside from the fact that he lives in Chicago, looks to be fairly young and plays an intense, assertive and agile guitar on Time Never Pauses, which, incidentally, is Luchs' recorded debut as leader of his own group. Luchs is also a writer who composed eight of the album's ten selections (the others are Duke Ellington's "Come Sunday" and Cole Porter's "Get Out of Town") and arranged all of them.

As a composer, Luchs draws inspiration from sources close to home—literally so, as the emphatic opener, "Der Lumenmeister," is a tribute to his father, the ballad "Elizabeth" to his mother, "Green DeLuchs" to one of his nicknames (with a further nod to one of his exemplars, guitarist Grant Green). "Janssen," "Taylor Street Swing" and "30 Rue des Martyrs" recall streets on which Luchs has lived, while "January Spring" retraces an unusually warm day spent in Luchs' apartment in Logan Square. As for marking time on Time Never Pauses, that assignment is in the capable hands of bassist Clark Sommers and drummer George Fludas who see to it that waywardness in that area is never a problem. Pianist Stu Mindeman and trumpeter Shaun Johnson round out the ensemble, with conguero Juan Pastor added on "Der Lumenmeister."

Luchs' tunes may best be described as competent but several strides short of memorable. In other words, not many listeners are likely to be humming them afterward. On the other hand, "Come Sunday" and "Get Out of Town," each taken at an unhurried pace designed to enhance its inbred charm, would leave pleasant memories in almost anyone's ear. Luchs and his colleagues handle them with due care, as is true on every number. While Luchs takes the lion's share of solos, Mindeman, Johnson and Sommers are impressive whenever called upon to extemporize, while Fludas also has a handful of shining moments in the sun.

Even though Luchs has entered a crowded field there is no doubt that he belongs. The question is, will his special voice be heard above the storm? Only time, which never pauses, can answer that question.