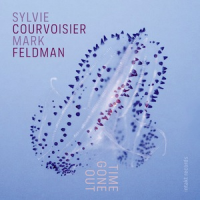 In a partnership that spans decades, pianist Sylvie Courvoisier and violinist Mark Feldman have forged a musical language that essentially obliterates the idiomatic distinctions between classical composition and improvised jazz. Both are unquestioned virtuosos, with the technical ability to do virtually anything on their respective instruments, and this is critical to their ability to create music that is on the one hand deliberate and meticulously crafted and, on the other, free-spirited and adventurous. Only musicians who have worked together as extensively as these two can achieve such a feat, one that requires a complete fusion of perspectives and a unique complementarity of purpose.

Courvoisier and Feldman have a quartet that has recorded episodically, most recently on Birdies for Lulu (Intakt, 2014) with bassist Scott Colley and drummer Billy Mintz. But they have always relished their duo recordings, where their mutual interactions can unfold most directly and immediately. Their first was Music for Violin and Piano (Avant, 1999), and they've done four others, most recently Live at Théâtre Vidy- Lausanne (Intakt, 2013), before once again teaming up for their current disc, Time Gone Out. Together, these releases are an impressive body of work, documenting the evolution of the duo's distinctive attempt to locate the vitality and surprise of jazz within music that, at least on its surface, takes the form of avant- garde classical performance.

The eight pieces on Time Gone Out are highly varied, yet they do possess a shared sensibility that gives the album its remarkable coherence. There are several miniatures, ranging from three to four minutes, and with the exception of "Éclats for Ornette," a previous version of which was found on Courvoisier's recent trio disc, D'Agala (Intakt, 2018), these are freely improvised; the longest pieces on the record are credited individually to either Courvoisier (the title track) or Feldman ("Not a Song, Other Songs"). Compositional credits aside, however, one of the marvels of this music is that it is virtually impossible much of the time to determine the boundaries between composed and improvised segments, so that the best way to appreciate the music is simply to take it in, reveling in its revelations, of which there are many.

The shorter, fully improvised pieces are potent bursts of concentrated energy and dynamic movement. Feldman's lyrical intensity shines on the opener, "Homesick for Another World," while Courvoisier's masterful use of the interior of the piano, one of her trademarks, offers piquant commentary on Feldman's floating lines and more abstract gestures. Contrastingly, pieces like "Éclats for Ornette" and "Blue Pearl" have ferocious rhythmic vigor and zesty jazz inflections scattered throughout.

But many listeners will find the longer pieces even more compelling. The tour de force title track, at almost twenty minutes, is a world unto itself, with beautiful, charged musical fragments entering and receding, and enough room for each musician to develop ideas both independently and mutually, being governed all the while by the piece's central logic. Its use of space is especially noteworthy, allowing Courvoisier and Feldman to take full advantage of its expansive duration in presenting their ideas. And "Not a Song, Other Songs" may be even better, with a somewhat menacing undercurrent to the music provided by Courvoisier's thunderous chordal attacks and Feldman's ecstatic surges.

While Courvoisier and Feldman will undoubtedly continue to ply their trade in many other contexts, it's worth celebrating that they return to this setting every so often—as a way to seek what is most essential in their music, and to allow us the opportunity to be astonished by their efforts.

Homesick for Another World; Éclats for Ornette; Limits of the Useful; Blindspot; Time Gone Out; Cryptoporticus; Not a Song, Other Songs; Blue Pearl.