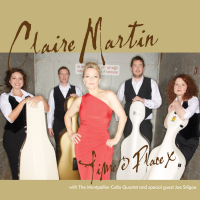 Few vocalists are as elegant and eloquent as Claire Martin. She's been dubbed "The First Lady of British Jazz," but she doesn't simply belong to her own people; she's one of the crown jewels of the jazz world, contributing classy and intelligent music via her steady flow of albums on the Linn imprint.

In the past, Martin has tried plenty of different things. She collaborated with pianist-composer Richard Rodney Bennett, tipped her cap to Shirley Horn, visited the Great American Songbook, connected with pianist Kenny Barron, and forged alliances with a variety of other musicians in various settings. She tries something new again on Time And Place, joining forces with The Montpellier Cello Quartet, a group that she first performed with in 2012. On tracks like "My Ship" and "Round Midnight," this outfit adds rich, stylish and sophisticated backing; on pieces like David Bowie's "The Man Who Sold The World," the cellos bring a sense of allure and seduction to the music; and on "Featherfall," the strings deliver tear-inducing backing that heightens Martin's emotional performance. It must have been written in the stars that Martin and The Montpellier Cello Quartet would meet.

While the voice-and-cello combination is at the core of this project, Martin has other collaborators here that add volumes to the music. A small jazz combo brings her upbeat arrangement of "Catch Me If You Can" to life, Mark Anthony Turnage delivers an arrangement of Joni Mitchell's infrequently-covered "Two Grey Rooms" that gives Martin a chance to channel the composer, and electric bassist Laurence Cottle adds some indigo-hued sounds to "Round Midnight." Then there's the work of pianist Joe Stilgoe, adding upmarket support and blending nicely with the strings on his own "Lost For Words."

Somebody with Martin's skills and experience knows full well that there's a time and a place to try certain things; she certainly found them here on this aptly-titled gem.

My Ship; Catch Me If You Can; She's Leaving Home; Early To Bed; Featherfall; The Man Who Sold The World; Lost For Words; Round Midnight; My Man's Gone Now; Two Grey Rooms; Goodbye For Now.