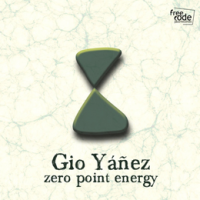 Guitarist Gio Yáñez makes his debut as a bandleader and recording artist with Zero Point Energy. He leads an impressive group of Spanish and Portuguese musicians on a set of original compositions that draw on contemporary jazz and rock as well as on the music of Galicia, where the guitarist began his studies with players such as Marcos Pin and Manolo Gutierrez.

There's a mid-album triumvirate of song titles that suggest more than a hint of doom-laden angst—"Please Don't Stop Your Fucking Drama," "Here's The Wheel That Kills The Will" and "Burial Of The Dead." Fear not, for this is no death metal combo (T.S. Eliot's poem The Waste Land inspired much of this music, lending some song titles and lyrics). The music is graceful and welcoming, each of the seven instrumentalists playing with sensitivity. The result is a lightness and, on up-tempo tunes such as "Datta, Dayadhvam, Damyata," an open, swinging, approach.

The music's lightness comes to a great extent from the bright tones of Yáñez' guitar and Marcel Pascual's vibes—a crucial pairing that's especially effective on the gentle swing of opening instrumental "Soma E Siga." Clara Buser heightens this vibe on "Here's The Wheel That Kills The Will" and "Burial Of The Dead," her tender vocals giving the songs an almost ethereal quality. The dreamlike "nnd"—a duet between Yáñez and Pascual, with each player swapping lead and rhythm roles—is notable for the precision of the playing and the warm humanity it exudes.

Yáñez is an unselfish band leader, giving ample opportunity for solos and lead lines to his fellow musicians. As a result Zero Point Energy comes across as a genuine ensemble performance—and a mature and enjoyable one at that.