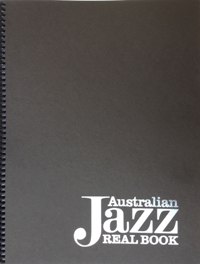 It's been five years in the making, but finally, Melbourne guitarist Tim Nikolsky's one-man crusade to assemble an Australian Jazz Real Book has succeeded. In fact, as Nikolsky related in a 2011 interview with All About Jazz , it's been a fairly democratic process, with a wide cross-section of Australian jazz musicians and educators canvassed for their suggested tune selections in an on-line survey or by telephone. Covering 70 years of Australian jazz, over 160 composers and more than 400 compositions are represented in the volume. Designed with an eye to both educational use and functionality on the gig, the AJRB is available in both book format—weighing in at 1.8 kilos, or digitally, where it's as light as a feather. The sheet music is beautifully notated and photographer Natasha Blankfield's striking black and white portraits of the musicians are an added bonus.

Inevitably perhaps, Nikolsky will face a certain degree of criticism for tunes omitted from the AJRB as well as for some of those included, but trying to represent Australian jazz across the generations in all its myriad styles is in itself a pretty daunting task and Nikolsky deserves huge credit for undertaking the task in the first place and for the admirable job he has done. For those quick to draw daggers Nikolsky is equally quick to point out that there are always Volumes 2 and 3 to come. Nevertheless, looking at the bigger picture, Nikolsky has already achieved what nobody before him was able to do and the Australian Jazz Real Book will no doubt contribute much to the preservation and development of Australian jazz

In endorsing the AJRB, the legendary pianist/composer and bandleader Graeme Bell noted: "It is projects like Tim Nikolsky's Australian Real Book that will help save jazz music from sinking into the waters of invisibility." It must have been particularly satisfying for Bell—one of the historical greats of Australian jazz—to have seen the AJRB realized shortly before he died at the age of 97. Bell wrote over 1,500 compositions during his lifetime and seven are included in the AJRB.

The older generations of Australian jazz are represented by the compositions of multi-instrumentalists Don Burrows, Ade Monsborough and John Grant Sangster, trumpeter Bob Barnard, alto saxophonist Bernie McGann and pianist Bob Sedergreen, to name but a few. More than half the tunes date from the 2000s, reflecting the contemporary nature of the AJRB and Nikolsky's desire to inspire current and future generations of Australian jazz musicians: "I think it's important that they have tunes of their immediate peers that they can aspire to," said Nikolsky in the same 2011 AAJ interview, ..."musicians who they can actually go to a gig and see or check out a YouTube of them performing, or buy an album of the people who are in this Real Book."

Well-established contemporary artists include saxophonists James Morrison and Sandy Evans, pianist Paul Grabowsky and drummer Allan Browne. The younger generation is well represented—saxophonist Jamie Oehlers, guitarists James Sherlock, James Muller and Steve Magnusson, drummer Scott Tinkler and pianist Ben Winkelman are just some of the names that collectively point to the breadth and depth of talent in Australian jazz—and that's just the guys. Striking too, the number of women included: pianists Andrea Keller and Judy Bailey, singers Christine Sullivan, Gian Slater + 14 Voices, Kristin Berardi and Michelle Nicolle, double bassist Tamara Murphy and around 20 other women are indicative of the gradual change in jazz—and not just in Australia—from what was once an overwhelmingly male domain to one where women contribute an increasingly important part of the historical narrative.

The Australian Jazz Real Book recognizes that Australia has unique jazz talent worth documenting and promoting. Above all, the AJRB is a celebration of the independent character of Australian jazz, born of the American tradition certainly, but increasingly standing on its own two legs, as indeed it is throughout Europe. It'll be fascinating to see how this overdue publication impacts on Australian jazz in the years to come, and whether or not it will encourage similar projects in other countries. Nikolsky, suffice it to say, has done a great service to Australian jazz. The AJRB formally posits that there are alternatives to the American jazz standards, thus helping to move the music forward, which after all, is what jazz has always been about.