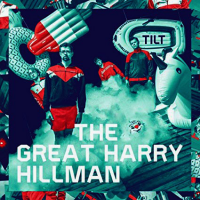 The Great Harry Hillman formed a little more than one hundred years after its American namesake won three gold medals in the 1904 Summer Olympics. Despite the naming convention, the group is Lucerne-based and not yet well-known on this side of the Atlantic. The quartet is a collective effort in composition and performance, and that democratic philosophy is reflected in the eclectic choice of music on Tilt.

German born multi-reedist Nils Fischer plays saxophone and bass clarinet, favoring a genre-free setting. He moved to Lucerne, Switzerland in 2008, studying with a number of well-known regional artists and earning a Master of Performance degree. Guitarist David Koch, a native of Switzerland, was originally a flautist covering a broad spectrum of music from Irish folk to klezmer, where he took up guitar. A Master of Arts and another Swiss native, Samuel Huwyler began his musical life as a guitarist before moving to bass. Dominik Mahnig was born in the home of the Swiss jazz festival, Willisau, a setting that would become a significant influence on his musical life. A drummer from an early age, he has performed with Mark Dresser and Simon Nabatov, among others.

"Snozelen" opens with Dominik Mahnig's wash of cymbals and Koch's crystalline guitar, imparting an air of mystery. Mahnig slowly builds to a frenetic barrage, counter to the otherwise reflective mood of the piece. Fischer joins in on saxophone, maintaining the shadowy ambience of the opening. "Strengen Denkt An" takes a different tack as Mahnig and Huwyler's pounding introduction leads to Koch's dominant, hard-rock guitar. Fischer switches to bass clarinet, completely changing the nature of the piece, but not labeling the style in any specific way. "The New Fragrance" takes yet another turn, as a loosely structured and pleasing romp with Latin tinges, while "354°" takes a slightly disjointed melody and builds in intensity, culminating in a fiery Fischer saxophone solo.

There is a great deal of variety on Tilt from the expansive "Agnes Fliegt" and "Remazing Ace" to the abstract "How to Dice an Onion" and electronically influenced "Moustache." All non- conventional, immediately accessible and, most importantly, fun to listen to. Like their two previous albums Livingston (RecordJet, 2013), and Veer Off Course (Klaeng Records, 2015), The Great Harry Hillman masterfully blends atmospherics with improvisation and Tilt should bring the group some well-deserved recognition in the U.S.

About The Great Harry Hillman