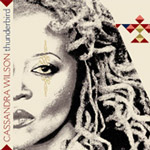 Cassandra Wilson sings blues the way they should be interpreted. For her latest album, she adds a little pop and hip-hop to the formula, reminding us that jazz and blues both started out as popular music of the day. Programmed drums and a mechanical rhythm appear side by side with Wilson's earthy vocals as she interprets an eclectic program of originals and blues classics.

Hip-hop ambience, multitracked voices, a techno-dance beat and mesmerizing rhythms color "Go to Mexico, "Closer to You, "It Would Be So Easy, "Poet and "Tarot. However, Red River Valley appears in its purest form with nothing but Colin Linden's acoustic guitar alongside Wilson's searing vocal. It's lovely, traditional, and quite different from most of the program. She's at her best with soliloquies such as this one.

Blind Lemon Jefferson wrote "Easy Rider, and Wilson sings it as a tribute to the roots of blues in general. She begins with a low moan and builds this piece into a fierce weapon. A definitive high point, this emotional arrangement helps to make Thunderbird a success. "Lost, interpreted alone with Marc Ribot on guitar, is a lovely ballad that allows her to share heartfelt joy with her audience.

Willie Dixon's "I Want to be Loved is portrayed in contemporary blues form with Wilson's unique vocal delivery. Keb' Mo' and Colin Linden add hot guitar licks that drive this one passionately. The memorable lyrics take on special meaning when she takes charge. "Strike a Match forms an exotic union between jazz and blues, forging ahead with one of her more creative performances. The singer's charismatic vocal interpretation engulfs you with its mystic power.

Thunderbird is not Cassandra Wilson's best album. However, she remains a unique voice in jazz and blues, persevering and continuing to surprise us with fresh ideas.