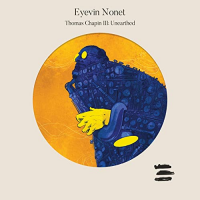 Thomas Chapin was taken from us far too soon. The saxophonist passed in 1998 at age forty, just as he was hitting his stride as a composer. The now defunct Knitting Factory Records was the source of his last recordings. If the label hadn't been run on a shoestring, we might have heard Chapin's music for larger ensembles, maybe even orchestra. That is where drummer and band leader Ivan Bamford comes in. He obtained several unfinished compositions from Chapin's widow, Terri Castillo-Chapin, and arranged them for nonet. He had previously recorded and self-released Chapin's music for trio Hommage à Thomas Chapin (2018) and octet Hommage à Thomas Chapin Tribute Part II (2019).

Eyevin Nonet's Unearthed presents three unheard Chapin pieces, plus Bamford's "Maëllia" dedicated to his newly born daughter. Opening with "Fallen Angel," the music focuses on Chapin's inclination to insert changes into his music. Yannick Anctil's quiet piano opening shifts into a sly swing accented by Etienne Lebel's trombone and Bertrand Margelidon's trumpet before changing into a large ensemble glide, a Marilène Provencher-Leduc flute solo, and some Aurélien Tomasi saxophone flavoring. You get the idea, Chapin channeled through Bamford takes your ears on a rambling walkabout. The same goes for "Oracle" which leans into a chamber music sound and "Lense" which juxtaposes the heaviest with the lightest touches possible. With Chapin's approach to music in mind, Bamford utilizes every instrument as if each were essential for this recording to come together. The same can be said of his original "Maëllia," which packs a symphony into just five minutes and forty-one seconds. Aurélien Tomasi playing Chapin's actual alto saxophone sizzles and pops. How cool is that?