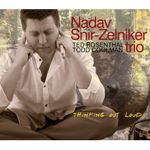 Israeli-drummer Nadav Snir-Zelniker approaches straight-ahead, swinging jazz with a joyful spirit on his debut recording Thinking Out Loud. From the opening notes of "Pizmon Layakinton (Song for Hyacinth)" anchored by veteran bassist Todd Coolman, the disc presents a trio sound sensitive to group communication and exceptional individualism. Pianist Ted Rosenthal guides the trio through an exquisite ride through ten tracks comprised of well-known standards and originals.

Demonstrating a thorough understanding of the jazz drumming tradition, Snir- Zelniker creates a comfortable, warm vibe with a deep ride cymbal groove on his composition "The Hard Way" and Bill Evans' "Interplay." A burning rendition of "Secret Love" featuring an inspired solo by Rosenthal, leaves no doubt about the drummer's technical command of the drum kit.

Coolman plays the role of consummate middle man throughout, providing rock- solid walking lines with an explosive tone. The bassist solos with a flowing lyricism on "Interplay" and Billy Strayhorn's "Isfahan," performed here with an up-tempo Afro-Cuban feel.

Snir-Zelniker's "Jack's Theme," a soft, buoyant piece, showcases intuitive listening among the trio with subtle interplay and dynamic tension. By focusing on the development of an ensemble sound, the trio is able to take a fresh approach to the overdone, such as "Blue Skies," and present accessible readings of the unfamiliar, such as Rosenthal's bouncy "Carefree."

Thinking Out Loud is a satisfying trio effort with attention-grabbing solos and shared musical empathy.