BY ALEX FRANQUELLI
October 15, 2015
Sign in to view read count 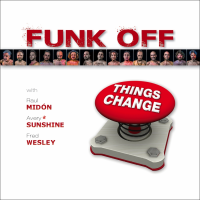 The whole point, when it comes to marching bands, is that they have to well, stroll around while playing their instruments. I guess, you guess, that the whole point is lost on CD, where the mono-dimensional (time) facet of the spectrum monopolises the dynamics of the whole. Things Change makes obviously no exception, but does it matter? Not at all. The range of influences at play here is— by itself—praiseworthy and laudable; the magnitude of their individual skillsets reveals a competence and unity that makes you wonder: do all marching bands sound like this? No, not really. This is funky in all its colourful glory, drenched in jazz, as if it had been forgotten in the Big Easy the day after the Mardi Gras, although this is music for no Wednesdays: it flows and shines at weekends.

If someone has been wondering whether or not the usual funky and soul heroes of many a generation have been thought of when writing this album, the answer is not only provided by the trombone whose life is blown in by none other than trombonist Fred Wesley on "Bill & The Sweet Fairy." And if you're wondering whether or not he's the the historic trombonist for James Brown and Parliament Funkadelic , the answer is: "yes, he is." But the groove continues on the beautifully catchy "Dance With Me," featuring one of the most interesting voices around. Avery* Sunshine seems to toy with the tune, stretching the pace, then adapting her vocal line to the texture before cleverly fading in the mix.

Founded in 1998, Funk Off (not the most original of names, I give you that) are, they say, the first Italian marching band, and they take some pride in saying that not only have they played every year from 2003 at Umbria Jazz, but they have collaborated with the likes of David Liebman, Paolo Fresu, Horacio "El Negro" Hernandez and Stefano Bollani. Things Change is their sixth album, and if you have had the chance to listen to the previous efforts, you might have noticed how the sound has undoubtedly matured, the exuberance of the winds has been gracefully tamed, while the overall sound has not suffered any notable blow.

This is jazz and funky, we said, but the main protagonist here is the groove, which sometimes is reminiscent of the big names (Lyn Collins, Bobby Byrd and, sometimes, Black Heat). Tunes like "The Certain Doubt," "Soulmates" and "Déjà vu" (the latter featuring Raul Midon), while, from time to time, the dynamics flow almost without coordinates (the magnificent flute on "Yin & Yang" and the enjoyable crossover that is "Groovy Day," for instance), but what is certain is that, even though if you are after daring and audacious ideas you should look somewhere else, Things Change is a thoroughly enjoyable album which can be and should be played over and over in order to better appreciate the myriad good ideas these 15 (yes, fifteen) Italians lay out. The result is an honest, heart-warming joy machine whose salvo is a blessing. Funky, soul, jazz, crossover and some swing make this record a contemporary amalgam of sounds definitely worth a listen. And you can remain in your seat: Funk Off will fill the room while casually striding between rhythm and half steps, colours and scales, James Brown, Marvin Gaye and your wandering thoughts.